We're kinda fed up of the weather at this stage. We were gearing up for the annual Leaving Cert weather to break out and shine down on us but instead we got rain, rain and more rain.

END_OF_DOCUMENT_TOKEN_TO_BE_REPLACED

What happened to the sun?! The heat?! Will it ever grace Ireland again?!

Well, Met Éireann has predicted that while the weather won't be as bad as yesterday, we're still going to see some showers across the country as well as temperatures reaching the mid-teens. So, a mixed bag all together.

The weather forecaster said: "A dull and cloudy start to Thursday. In the west and northwest the rain will gradually become lighter during the day with dry spells there for the afternoon. Elsewhere there will be showers again, with good bright or sunny breaks in between. Highest temperatures 11 to 15 degrees in light to moderate westerly winds."

In the west and northwest the rain will gradually become lighter during today with dry spells there for the afternoon. Elsewhere there will be showers again, with good bright or sunny breaks in between. Highest temperatures 11 to 15 degrees. pic.twitter.com/LivvYYoJOY

And for tonight: "Tonight will be mainly dry for much of the country, there'll be further showers along western coasts. Lowest temperatures 3 to 5 degrees with light southerly or variable winds."

Tomorrow is looking a little bit better as we're in for a dry start, but we wouldn't throw away the brolly just yet. 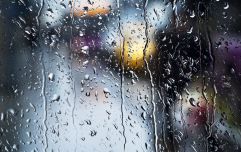 END_OF_DOCUMENT_TOKEN_TO_BE_REPLACED

"Friday will be mostly dry to start, there'll be showers in the west with sunny spells for most, in the afternoon it will cloud over from the east with outbreaks of rain developing along eastern coastal counties. Highest temperatures 14 to 16 degrees with light southerly or variable breezes becoming moderate to fresh northwesterly in Munster."

Girls With Goals || Her · Ep.160: The Beauty Of Coaching - Hayley Harrison joins us from Sport Ireland
popular
These 14 Dublin attractions are opening their doors again next week
I tried "slugging", the latest skincare hack
Doctors warning young people against 'sun cream contouring' TikTok trend
28 amazing Irish glamping spots for your 2021 staycation
"It's been a lesson in letting go,": Dearbhla Mitchell on growing her fitness business in 2020
Louise Redknapp just admitted a shocking truth about her ex husband, Jamie Redknapp
More footage of Tristan Thompson cheating on Khloe has emerged
You may also like
2 weeks ago
Saturday set to be one of the hottest days of the year so far
2 weeks ago
Temperatures to reach 18 degrees in Ireland this weekend
1 month ago
Met Éireann says snow will fall tomorrow night before a rainy weekend
3 months ago
Met Éireann issue snow warning as we are due another big freeze
4 months ago
Met Éireann issues ice warning as temperatures set to plummet overnight
4 months ago
Snow and temperatures as low as -4 on the way as freezing start to 2021 continues
Next Page