In fact, it's gotten so cold that Niagra Falls has been transformed - and looks like something out of Narnia instead of real life.

The tourist spot was left partially frozen over after the east coast in North America was hit by unseasonably cold temperatures. 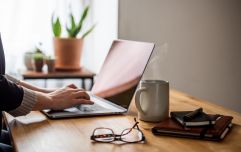 Work from home advice set to be reintroduced on Friday

END_OF_DOCUMENT_TOKEN_TO_BE_REPLACED

The cold snap, which has gripped some areas since the end of 2017, left the falls looking more like something out of a Disney film than the real world.

Global News' meteorologist Ross Hull said that New Year's Day in 2018 was the coldest on record for the Niagra Falls, with temperatures dropping under -26C.

#Saturday #Niagarafalls has frozen over thanks to the frigid temperatures being experienced in The Northern USA and most of Canada.
It is truely a winter wonderland. pic.twitter.com/AHJpCjKCXg

He told the outlet:

“That is well below average, considering the normal overnight/morning low should be closer to -7 C.

“The high temperature on New Year’s Eve was also well below average with a daytime high close to -15 C.”

Pictures on social media show ice and snow covering the majority of the tourist destination - leading many to call it a "frozen paradise" or "winter wonderland".

Massive icicles can be seen hanging from the rocks around the waterfalls, while trees in the nearby area coated with ice.

However, the actual falls themselves do not appear to be frozen.

Over 3,000 tonnes of water flow down Niagra Falls every second - so it would need to be a lot colder for the falls to freeze.

Niagara Falls State Park gets covered in a beautiful layer of frost after a cold snap hits the area. pic.twitter.com/dwx9ZD3vZ4

“Historically, ice does form over parts of the falls, but there is always water running beneath that ice.

“This may give the impression that the falls are frozen over but that’s not the case.”

While the photos may give the appearance that the falls have frozen over, this isn't quite the case.

The natural wonder hasn't stopped flowing since 1848, when an ice jam blocked the source of the water upriver.

popular
Here are all the Instagram accounts of the stars of Netflix's Cheer
A celebrity hairstylist just shared a genius hack for the perfect messy bun
16 and Pregnant star Jordan Cashmyer dies aged 26
Coming to terms with the fact that you're a Charlotte
Irish in Sydney shaken by Ashling Murphy murder
Someone has ranked the penis size of men from all over the world
Gardaí seize two cars linked to Ashling Murphy death as they question new suspect
You may also like
1 month ago
Goodbye sniffles: 5 easy ways to give your immune system a boost this winter
2 months ago
Oversized sweaters you need to fill your wardrobe this time of year
2 months ago
You can buy a heated jumper on Amazon this winter
2 months ago
Viral TikTok shows how to keep warm wearing tights in winter
3 months ago
The definitive guide to keeping spiders out of your home this winter
3 months ago
3 Biscoff hot chocolate recipes to enjoy this winter
Next Page