Minister for Health Simon Harris has asked anybody returning to Ireland from Spain or Italy to restrict their movements over the coming weeks.

Those entering the country from these areas are not being asked to self isolate, but to work from home if possible and to reduce their social interactions until March 29.

Harris told RTÉ's Morning Ireland that the decision was made to lessen the spread of the coronavirus.

Minister for Health Simon Harris has said all people coming back from Spain and Italy are being asked to restrict their movements for the next two weeks, which means not going to work | Read more coronavirus coverage: https://t.co/839hgCRs1u pic.twitter.com/9kqQLzY8Ck

"It is not quite self-isolate, but to restrict their movements," he said.

"Anyone returning from Italy and Spain will be met by environmental health workers on their return at the airport and told to restrict their movements.

"Where we are telling people it is unnecessary to travel to, we will then have to ask them to take additional precautions when they return to this country." 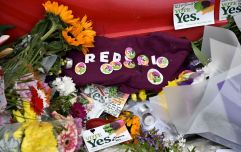 END_OF_DOCUMENT_TOKEN_TO_BE_REPLACED

Taoiseach Leo Varadkar announced yesterday that all schools, colleges, and childcare facilities will be closing for two weeks due to the Covid-19 pandemic.

He recommended that where possible, people should work from home and that people entering Ireland via airports should self isolate if they begin to experience symptoms.

"You can all play your part by handwashing, coughing and sneezing into your elbow or tissue and seeking medical advice if you develop symptoms," he added.

"This is more important than ever."

Minister Harris added this morning that those returning from the UK, specifically Cheltenham, should be extra vigilant but that there is no restrictions currently in place.

The public has been asked to practice social distancing until March 29.


popular
XOXO: Here's everything we know about the Gossip Girl reboot cast
'That’s the most honest answer': Skeet Ulrich reveals why he is leaving Riverdale
Irish Hairdressers Federation to propose guidelines for early reopening of salons
Leaving Cert 2020: Calculated grade student portal to open tomorrow
Paul Mescal is raffling off one of his iconic chains in support of Pieta House
QUIZ: How well do you remember Angus, Thongs and Perfect Snogging (the movie)
Recipe: 3 ingredient zesty body scrub to give you a stunning spa experience from home
You may also like
11 hours ago
Irish Hairdressers Federation to propose guidelines for early reopening of salons
3 days ago
#UpBeat: 5 good things that happened this week
3 days ago
5 years since Marriage Equality: 5 things we still need to achieve
4 days ago
Victoria's Secret to permanently close 250 stores across the US and Canada
4 days ago
Met Éireann issues weather warning for three counties
5 days ago
Aldi donates 100,000 face masks to charity amid #Covid-19 pandemic
Next Page