"The next thing I know is I'm being punched."

Arrests have been made in London following a homophobic incident where a lesbian couple were beaten up by a group of men for refusing to kiss.

Melania Geymonat and her girlfriend Chris were sitting on the top deck of a bus travelling to Camden last month when they were harassed by a group of young men.

END_OF_DOCUMENT_TOKEN_TO_BE_REPLACED

Geymonat said that the men began telling the couple to kiss while making sexual gestures at them.

The 28-year-old said that she tried to make some jokes to calm the men down, but that they "kept on harassing us, throwing coins at us and becoming more enthusiastic about it."

"The next thing I know is that Chris is in the middle of the bus fighting with them," she wrote on Facebook. "On an impulse, I went over there only to find her face bleeding and three of them beating her up."

"The next thing I know is I'm being punched. I got dizzy at the sight of my blood and fell back.

"I don't remember whether or not I lost consciousness. Suddenly the bus had stopped, the police were there and I was bleeding all over."

Geymonat said that four of the men might have broken her nose during the attack. She added that the group stole a phone and bag from them before exiting the vehicle.

London mayor Sadiq Khan has condemned the "disgusting, misogynist attack" stating: "Hate crimes against the LGBT+ community will not be tolerated in London." 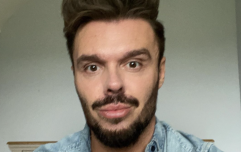 END_OF_DOCUMENT_TOKEN_TO_BE_REPLACED

Metropolitan police have said that the investigation remains ongoing and have appealed to any witness of the attack.

"The incident happened at approximately 02:30hrs on Thursday, 30 May after the two women, both aged in their 20s, boarded a N31 bus in West Hampstead," their statement read.

"As they sat on the top deck they were approached by a group of four males who began to make lewd and homophobic comments to them.

"The women were then attacked and punched several times before the males ran off the bus. A phone and bag were stolen during the assault."

Both Geymonat and her girlfriend were treated for facial injuries following the assault.

popular
Simon Harris gives three urgent options for easing restrictions next week
Personality QUIZ: Which character from You are you?
Another Strictly star has pulled out of the live show
This TikTok hack shows you how to pack more despite baggage allowance
Addison Rae temporarily banned from TikTok
Tributes paid to Limerick based blogger and model Patrick McLoughney
Lidl closing early this weekend to thank staff for hard work
You may also like
1 day ago
Are we really still debating whether contraception is a good thing?
3 days ago
Met Éireann warns of 'potential hazards' as weather set to change this week
3 days ago
Brian Laundrie's family issue statement after Gabby Petito cause of death
4 days ago
Met Éireann issue weather warning as 'Atlantic regime' due to hit Ireland
4 days ago
Dublin bakery introduces 15c paper bag levy to tackle waste
4 days ago
Thailand will re-open to some vaxxed tourists next month
Next Page