The figures were released on Wednesday morning.

Research has found that Ireland has a significant gender pension gap, with retired women getting an average of  €153 less a week in pensions than men.

A new report from the Economic and Social Research Institute (ESRI) has found that men get €433 on average per week, while women receive just €280 per week.

END_OF_DOCUMENT_TOKEN_TO_BE_REPLACED

This means that over the course of a year, retired women receive on average almost €8,000 less than men.

Acording to the ERSI, the gender pay gap is largely due to differences in incomes from private and occupational pensions.

55 per cent of retired men receive a private or occupational pension, compared to only 28 per cent of women.

For these types of pensions, research shows that lower relative years of work experience among women also increases the gap.

END_OF_DOCUMENT_TOKEN_TO_BE_REPLACED

The study shows a significant difference in the number of years worked by men and women.

The report also found that there was no gender difference in income poverty. 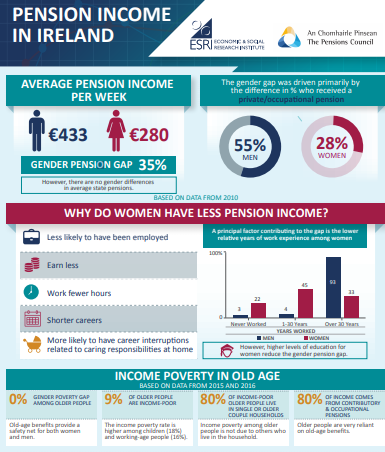 popular
Baby found unattended in pram in Dublin, Gardaí reveal
Joanna Cooper heartbroken after her mum is diagnosed with dementia
Love Island first look: The Hideaway is open tonight as Ron has something to tell Lana
Toddler tragically dies in Wicklow following choking accident
No plans to abolish homework, says Minister Foley
Irish women call for access to drug to treat Hyperemesis during pregnancy
Gwen Stefani reportedly pregnant with baby number four
You may also like
4 weeks ago
Russell Crowe donates €5,000 to Irish book club charity appeal
1 month ago
US fast food chain Wendy's planning to open in Ireland
2 months ago
Employment lawyer and TikTok sensation Richard Grogan has passed away
2 months ago
Calls to remove 'inhumane' 12-week limit on abortion services in Ireland
2 months ago
Status Yellow warning issued with heavy rain and wind on the way
2 months ago
"Extraordinary courage and integrity" – Micheál Martin leads tributes to Vicky Phelan
Next Page