Take That's New Music May Be Released "Within Weeks"

It has been revealed that Take That may well be releasing some brand new music “within weeks”, despite the news that Jason Orange has just left the band.

The trio (yup, there are only three left), are pressing on with plans to release the music despite the sudden departure of Orange.

It was confirmed that Jason would not be featured on the forthcoming record or in any upcoming tours. 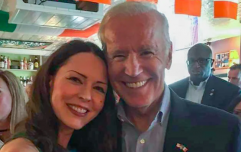 END_OF_DOCUMENT_TOKEN_TO_BE_REPLACED

Gary, Mark and Howard are believed to be releasing their brand new studio album “within a few weeks” according to reports. The singers are said to have been working on the new material since January of this year.

A source told Metro: “The first songs could be with fans within a few weeks. Fans are backing the boys to stay together.”

It was also revealed though that Jason would be missed, particularly for his attention to detail.

“He was key to the group’s quality control. He’d always speak his mind if he thought something was rubbish.”

Girls With Goals || Her · Ep.161: Feeling Peachy - Sharon Keegan of Peachylean on being an absolute BOSS!
popular
Aldi is selling a 2in1 grill and fire pit just in time for summer
Meghan Markle posed with a Kate Middleton magazine cover in 2014
Aldi is selling outdoor string rattan chairs for €30
Trial date set for former nurse charged with murder of eight babies
Cork school may need to close due to "serious" Covid outbreak
Naomi Campbell welcomes baby girl
Here's what happens on every day of your menstrual cycle (roughly)
You may also like
5 days ago
ABBA are planning to release new music this year
2 weeks ago
Irish collective release new female empowerment pop anthem
2 weeks ago
Irish pop sensation Ódú returns with disco infused single, Men Like Me
1 month ago
Get WAP on repeat! Research reveals listening to Cardi B will make you rich
1 month ago
Why Kate Nash's promise to tackle sexual abuse in the music industry is so important
1 month ago
Justin Bieber receives cease and desist over album cover
Next Page