Teenage Girl Cut Off Uncle’s Penis During an Attempted Rape

In recent years India has come in for widespread criticism for its record on handling sexual violence against women. One young woman recently took matters quite literally into her own hands when faced with an assault.

A teenage girl in the Madhepura district of Bihar, India, cut off her uncle’s penis during an attempted rape.

The girl’s mother first took her to the man, a trusted family member known as a local healer or ‘tantrik’, when the girl became ill over a month ago. Claiming that she was under the influence of a supernatural power, he took her to a private room and allegedly gagged and raped her, to ‘rid her of the spirits’. 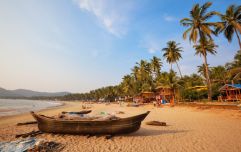 Woman raped on beach in Goa after being offered a massage

END_OF_DOCUMENT_TOKEN_TO_BE_REPLACED

The next day, the man went to the teenagers house and requested that she come to his home. She did, carrying a mobile phone and a knife. Police told media that the young woman recorded a conversation with her uncle using the phone, and when he attempted to rape her a second time, she used the knife to cut off his penis.

The teenager then filed a complaint with police.

When asked whether the teen would face criminal charges for her knife attack, senior officer A.K. Singh, superintendent at the Alam Nagar police station, told the Independent, “Why should we file a case against her? We should applaud her bravery and courage.”

popular
Couple decide to live on cruise ship permanently after finding it's cheaper than paying mortgage
Siobhan O'Hagan reveals she's expecting her first child
Why Are Men so Obsessed With Boobs? The Answer is Pretty Surprising...
Police believe they know what happened to missing dog walker Nicola Bulley
Bobi the farm dog is the oldest living pooch ever aged 30
Sad news for the royal family as Princess Beatrice's puppy dies from poisoning
Here's why Nicola Peltz-Beckham's family are suing her wedding planners
You may also like
1 month ago
Andrew Tate releases statement following Romania arrest
5 months ago
Making A Murderer's Steven Avery has blamed a brand new suspect in latest appeal
7 months ago
Harvey Weinstein to be charged with indecent assault in London
1 year ago
Actor Armie Hammer accused of sexually assaulting woman
3 years ago
An estimated one in five reported rapes in Ireland are by a partner - why?
3 years ago
'Consent condom' requiring four hands to open criticised for missing the mark
Next Page