Biden will likely need to wear a boot for some weeks.

Donald Trump has appeared to wish president-elect Joe Biden good health after he fractured his foot while playing with one of his dogs.

Biden, who will enter the White House in January, attended an orthopaedist in Delaware over the weekend after suffering a small fracture in his foot. 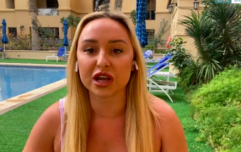 END_OF_DOCUMENT_TOKEN_TO_BE_REPLACED

According to a statement, the president-elect slipped on Saturday while playing with his rescue dog, Major.

Doctor Kevin O'Connor confirmed that Biden suffered small fractures in two bones in the middle of his right foot. "It is anticipated that he will likely require a walking boot for several weeks," Dr O'Connor said.

Following the news that Biden had been injured, current US president Donald Trump took to Twitter to issue some apparent words of support.

Retweeting an NBC video of Biden leaving hospital, Trump said: "Get well soon!" - a move that he been deemed as surprising by many, given the president's only recent decision to admit that he had, in fact, lost the election.

The Bidens have two dogs, Major and Champ, and have said that they also plan to get a cat prior to their entry to the White House.

During his campaign, Biden made it clear he wanted to, "bring dogs back to the White House." His predecessor, Donald Trump, was the first president in decades not to own a dog. President Obama had two Portuguese water dogs, Bo and Sunny, by his side for his eight-year tenure.

At 78-years-old, Biden is the oldest president to ever take office in the States.

His recent doctor's reports have, however, described him as "healthy, vigorous" and "fit to successfully execute the duties of the presidency."

Girls With Goals || Her · Ep.154: Scholarship Squad Take 2 - Smurfit alum Grace Milton
popular
Irish designer "mindblown" as Dr Jill Biden wears dress she embroidered
Someone has ranked the penis size of men from all over the world
Dad designs bikini line for transgender teens
New Zealand set to close its borders for the entirety of 2021
Leo Varadkar says if Ireland introduced mandatory hotel quarantine, it would have to do so for a year
'They're Dead To Me Now' - Kate And Oliver Hudson Have Been Disowned By Their Father
Kylie Jenner just posted a naked snap on Instagram, and people are NOT happy
You may also like
21 hours ago
Bill introduced to make period products free in Ireland
21 hours ago
Lockdown to be extended to March 5
1 day ago
Joe Biden set to end abortion funding ban in the US
1 day ago
Spanish woman mistakenly believed to have died from Covid returns to care home
4 days ago
Dublin man jailed for 10 years over coercive control in first for Ireland
5 days ago
Fire breaks out at world's largest Covid-19 vaccine production centre
Next Page