Just days after U2 rocked a sold out Croke Park for their Joshua Tree tour, Adam Clayton and his wife Mariana have confirmed that they have become parents for the first time.

The couple made the official announcement in the personal section of The Irish Times, which read:

"Adam and Mariana Clayton are delighted to announce the birth of their beautiful baby girl Alba." 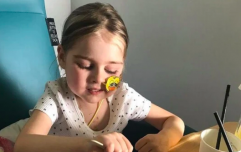 END_OF_DOCUMENT_TOKEN_TO_BE_REPLACED

Adam and Mariana married in a small ceremony in Dublin in 2013, before having a second wedding day in Cannes a few days later.

Bono recently let slip that Adam and Mariana were expecting a baby when he announced it on stage when playing in London as part of their tour. He said, "Is Adam Clayton not a sexy man?"

END_OF_DOCUMENT_TOKEN_TO_BE_REPLACED

Then turned to Adam and said, "Is your sexy woman here tonight?” He also then asked, "And, expecting a sexy baby, can I say that?"

Unsurprisingly Adam says "no" which left Bono saying, "Forget I said that!" and mouthing the word 'sorry' to Adam.

popular
Couple decide to live on cruise ship permanently after finding it's cheaper than paying mortgage
Siobhan O'Hagan reveals she's expecting her first child
Why Are Men so Obsessed With Boobs? The Answer is Pretty Surprising...
Police believe they know what happened to missing dog walker Nicola Bulley
Bobi the farm dog is the oldest living pooch ever aged 30
Sad news for the royal family as Princess Beatrice's puppy dies from poisoning
Here's why Nicola Peltz-Beckham's family are suing her wedding planners
You may also like
9 hours ago
Does how late you enter the Love Island villa affect your chances? A super scientific study
6 days ago
New version of Jesus Christ Superstar launches with non-binary Jesus and a female Judas
1 week ago
Naked Attraction host left speechless after seeing contestant with 'world's biggest penis'
1 week ago
Bruno Tonioli confirmed as David Walliams' Britain's Got Talent replacement
1 week ago
Love Island's Haris reportedly dumped from villa after street brawl video
1 week ago
Kylie Jenner wears huge lion's head attached to dress at fashion show
Next Page