Reports have surfaced that a Merman* has washed up on the shore of a beach in Poland.

This video apparently shows the moment some official looking people in overalls carried a washed up Merman to a trolly. The video, captured on a phone with a questionable camera, definitely shows a suspicious looking creature. 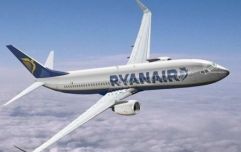 A Very Familiar Face Was Checking Ryanair Passengers in This Morning

END_OF_DOCUMENT_TOKEN_TO_BE_REPLACED

*It’s quite possible that it is a Mermaid as obviously the gender is impossible to determine from such a distance. We in fact, believe that Merpeople need not conform to gender roles.

*May also be a dolphin or large fish.

popular
Celine Dion, 54, diagnosed with incurable neurological disease
Fans are feeling seriously sorry for Molly Mae Hague after resurfaced interview
Here are our top picks from this week's Lidl Toy Event
He may be a politician, but Leo Varadkar's personal life is none of our business
Maura Higgins claims she was left by designer who went to style someone else at an award show
HSE advises children with sore throat, cough and fever should stay at home
Tom Parker's wife suffers more heartbreak just nine months after husband's death
You may also like
3 years ago
Turns out, this colour of wine gives you the WORST hangover
4 years ago
Love a bit of gossip? It might not be as bad as you think
6 years ago
Lily Allen has revealed that she was stalked for seven years
6 years ago
Pretty Little Liars actor Brandon Jones could be facing over five years in prison
6 years ago
Gwen Stefani Receives Massive Backlash After "Insulting" April Fools' Prank
6 years ago
Katie Price Names And Shames The Twitter Trolls Bullying Her Son Harvey
Next Page