The incident occurred on Monday.

According to reports, the woman broke her pelvis when a member of the Cambridge's security team crashed into her.

It has also been reported that the incident occurred while the motorcycle was driving on the wrong side of the road.

Witnesses say that Irene Mayor was hit by a police motorcycle leading Prince William and Kate on their way to the Order of the Garter Service at Windsor Castle on Monday.

Pictures from the scene revealed the motorcycle on the wrong side of the road, at a pedestrian crossing where Irene was walking home.

The Duke and Duchess of Cambridge joined The Queen and Members of the Royal Family to attend this year’s Order of the Garter service in St George’s Chapel, Windsor Castle. The Order of the Garter is the oldest and most senior Order of Chivalry in Britain, established by King Edward III nearly 700 years ago. The Order includes The Queen, who is Sovereign of the Garter, The Duke of Cambridge and several senior Members of the Royal Family, and twenty-four knights or ladies chosen in recognition of their work. Knights of the Garter are chosen personally by the Sovereign to honour those who have held public office, who have contributed in a particular way to national life or who have served the Sovereign personally. Supernumerary, or ‘Stranger’ Knights, are overseas monarchs appointed to the Order, and are in addition to the twenty-four knights or ladies — The King of Spain and The King of the Netherlands attended this year’s Garter Day service, during which they were installed as Supernumerary Knights of the Garter. Earlier in the day The Queen held a private Investiture in the Garter Throne Room at Windsor Castle, where Lady Mary Peters was invested with the Order's insignia by Her Majesty. During their visit to Northern Ireland in February, The Duke and Duchess congratulated @Olympics gold medallist Lady Mary on her appointment to the Order of the Garter. ? Kensington Palace/PA @TheRoyalFamily @koninklijkhuis #GarterDay #WindsorCastle

Irene Mayor's daughter has said that "she's got lots of injuries. They are just keeping her stable at the moment."

Prince William and Kate are also incredibly concerned by the incident, and are planning to visit Mrs Mayor. 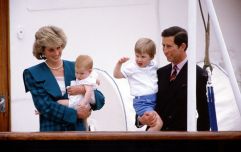 These are the names Charles had picked for William and Harry

END_OF_DOCUMENT_TOKEN_TO_BE_REPLACED

"In line with procedure, the Metropolitan Police Service referred the collision to the IOPC."

"Our staff attended the scene of the incident and after careful consideration, we have launched an independent investigation. The investigation is in its very early stages and the officer involved is assisting our enquiries as a witness."

"She's an incredibly nice person. I have known her for over 40 years. She used to do a lot of voluntary work for the church and her husband Walter used to lead the evening service."

"We were all devastated when we heard she had been hit by the police bike. Irene is always smiling and cheerful, hopefully she'll be back at church soon."

Irene Mayor is said to be in serious but stable condition.


popular
BRB, running to Penneys for the €19 trousers that look like they cost ten times the price
The comfy €42 M&S boots we're going to be living in all spring
'Be A Lady, They Said!' You need to watch this incredibly powerful video about being a woman
The dress that Holly Willoughby wore this morning is getting very mixed reactions
'Be a lady they said' made waves yesterday, at the exact moment it should have
Netflix's The Woods is the thriller that will be your next TV obsession
Turns out Love Is Blind didn't show us every couple that got engaged
You may also like
1 week ago
'William didn’t feel he could do much to help': Kate Middleton opens up about her experience with severe morning sickness
2 weeks ago
Kate Middleton and Prince William have announced an official visit to Ireland next month
2 weeks ago
Kate Middleton is back wearing Zara again but of course, her dress is now sold out
3 weeks ago
Brad Pitt made a joke about Harry and Meghan last night in front of Prince William
1 month ago
Prince William shares details of his 2010 marriage proposal to Kate Middleton
1 month ago
Kate Middleton is wearing an amazing red glittery gown tonight and she looks like a princess
Next Page