Cork's Ashling Thompson has a pre-game workout and it's GOALS

Brought to you by Red Bull.

Those are the words of Cork's camogie champ, Ashling Thompson, who is proving to be an absolute force of nature. With an All-Ireland camogie final win under her belt and a determination unlike any other, this woman is on top of her game.

That’s not to say she’s a stranger to failure - Ashling has had plenty of that before reaching success, and has been quoted as saying;

“Failure is delay, not defeat.” 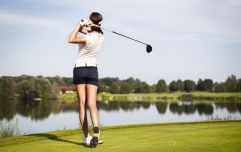 END_OF_DOCUMENT_TOKEN_TO_BE_REPLACED

Despite so many people working hard to achieve their goals, this is a truth many people forget, resulting in lost confidence plus the strive for greatness in what they do. But Ashling has never let doubt creep in. Instead she has hit the gym non-stop to build incredible strength and stamina - ensuring she’s ready for anything out on there on the pitch.

In preparation for a new season, she commits herself to strenuous exercises that build her shoulders, and touchen her arms and back. Upper body is her big focus as it's vital for someone playing midfield.

Although Ashling’s career depends on her strength and fitness, this way of living is everyone’s top priority, especially when a lot of us spend our time sitting and not moving. That’s why we’re encouraging everyone to join Ashling’s fitness plan.

It’s intense, it’s insane, it will hurt and it’s entirely awesome! Start training to feel fantastic and energised. Give yourself the tools to find build on your success now and stay driven.

Brought to you by Red Bull.

popular
Love Island fans have some things to say about Shaq and Tanya's confession
Man charged with the murder of pregnant Natalie McNally
Wayne Lineker called out for comment on Tommy and Molly-Mae's baby news
Natalie Imbruglia's Torn is actually a cover and the original just isn't the same
Chris Hughes reveals he has been rushed to hospital in "worst" night of his life
Love Island's Haris spills all on an unaired fight between Zara and Tanyel
Priscilla Presley pays tribute to daughter Lisa Marie on her 55th birthday
You may also like
1 week ago
"I feel like I lost myself": Nathalie Lennon on her mental health struggles and her latest project with Pieta
2 weeks ago
WIN: Tickets to the Irish premiere of Magic Mike's Last Dance in Dublin
1 month ago
New year fitness goals? Lidl's got you covered
1 month ago
Buying your first home in 2023? This FREE online mortgage event is perfect for you
1 month ago
4 easy and practical tips for saving money on your utility bills this winter
1 month ago
8 must-watch movies coming to cinemas during Christmas and the New Year
Next Page