The Norwegian women's beach handball team was fined €1,500 for wearing shorts during a European Championships match.

Associations from across the world of women's sport have called on the presidents of both the international and European handball federations to resign over "blatant sexism."

The Norway women's beach handball team decided to wear shorts during a European Beach Handball Championships match against Spain in Varna, Bulgaria, on 19 July. This was in protest against rules that require female players to wear bikini bottoms for matches.

END_OF_DOCUMENT_TOKEN_TO_BE_REPLACED

In a statement on the incident, the European Handball Federation (EHF) said that the team had been disciplined because of "improper clothing."

In a later statement, the EHF said that the matter of players' uniforms would be discussed during a commission meeting in August,

The EHF release the following statement on beach handball and clothing regulations.https://t.co/LBM31JlnY6

The fine equated to €150 per player, but was paid for by the Norwegian Handball Federation. In a bizarre turn of event, popstar Pink then offered to pay the fine for the team.

I’m VERY proud of the Norwegian female beach handball team FOR PROTESTING THE VERY SEXIST RULES ABOUT THEIR “uniform”. The European handball federation SHOULD BE FINED FOR SEXISM. Good on ya, ladies. I’ll be happy to pay your fines for you. Keep it up.

END_OF_DOCUMENT_TOKEN_TO_BE_REPLACED

Now, seven women's sport associations from across Europe have written to the International Handball Federation (IHF) president, Hassan Moustafa, and EHF president, Michael Wiederer, calling for them to resign.

The letter, which has been signed off by associations from France, Germany and Italy amongst others, says that both the EHF and the IHF have "established an embarrassing point of no return regarding their image as international sports institutions."

Luisa Rizzitelli is the president of Assist, an Italian association that promotes and defends the rights of female athletes. According to the Guardian, she said: "This is a blatantly sexist custom that needs to be eliminated." 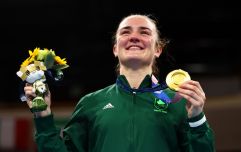 END_OF_DOCUMENT_TOKEN_TO_BE_REPLACED

Rizzitelli said that the IHF's clothing requirements "shouldn’t mean exploiting the body of a woman," and described their confirmation of the €1,500 fine as "a shameful thing."

The IHF have said that a proposal for new uniforms and change to clothing rules could be presented to the body's council in November.

popular
Late Late Show viewers are not happy with Ryan's questions for Billy Connolly
Friends Star James Michael Tyler Files For Divorce
Friends actor James Michael Tyler has died, aged 59
10 items from Zara for the perfect autumn capsule wardrobe
9 of the best horror movies on Netflix this Halloween
Say hello to fairy hair, the dreamy new trend popping up all over social media
The First Quadrillionaire? Paypal Accidentally Gives Man $92 Quadrillion
You may also like
1 week ago
Olympian and world champion runner Agnes Jebet Tirop found dead in home
1 month ago
Women's Afghan football team evacuated safely from Kabul
2 months ago
Wicklow swimmer Sarah Mortimer crosses English Channel in just 13 hours
2 months ago
Kellie Harrington will go for gold in Olympic final
2 months ago
Olympians are taking a stand against sexism in sport - and it's been a long time coming
2 months ago
Nadia Power: "The Olympics was a goal I was too afraid to set"
Next Page