Most of you probably woke up this morning beaming with pride (and a hangover from hell).

Yesterday was an historical day for sport, as the Irish rugby team beat the AllBlacks at home, for the first time ever.

There were tears of joy, chants of triumph and a whole lot of singing!

And now, looking at the result 24 hours later - it seems as though Ireland are the best rugby team in the world.

Small island, sure... but not to be messed with!

After the game, the New Zealand coach Steve Hansen said that the Irish are now the best team on the planet.

The press in New Zealand appear to be of the same opinion! 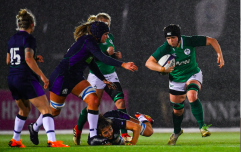 END_OF_DOCUMENT_TOKEN_TO_BE_REPLACED

The NZ Herald reacted to the win, saying:
“Ireland are the world’s best, then. Certainly that is now true of 2018."

“Six Nations champions, and now having secured their first home victory over the All Blacks in history, to go alongside their maiden win two years ago, they are deserving of that mantle.”

Last night was really special, an incredible atmosphere from some incredible fans and a big team win ☘️

Richard Knowler, of Stuff.co.nz, writes: “Ireland are the unofficial kings of world rugby."

“On this performance at the Aviva Stadium in Dublin, a well-deserved 16-9 victory over the All Blacks, it would be churlish to dispute the argument that the superpower of northern hemisphere rugby now deserves to be considered the best team on the planet.”


We're catching up on all the Love Island action from the weekend with Cassie Stokes and Stephen Byrne!


popular
Holly Willoughby's checked Zara skirt is the perfect way to dress up your everyday look
Celebrities have nothing but praise for Jennifer Aniston's 'morning after' post
Louise Cooney just wore a gorgeous €65 coat from Pretty Little Thing and we ADORE it
Bank of Ireland warns customers to delete latest scam text from phones immediately
8 GORGEOUS little matching tattoos you should get with your BFF
The flattering €16 Penneys dress we'll be wearing every day for the foreseeable future
Eve finally tells the story of Tyga slipping into her DMs, and it's a little suss
You may also like
5 days ago
Greg O'Shea set to host a new show on Virgin Media with Muireann O’Connell
3 months ago
You can get breakfast delivered to your door ahead of the match on Saturday
4 months ago
The official starting Irish team for the Rugby World Cup has been announced
5 months ago
World Rugby drops gender references from World Cup titles
5 months ago
Connacht Rugby announces three-year sponsorship to encourage more young girls to play rugby
5 months ago
The inspiring Japanese women who fought for their right to play rugby
Next Page