"We place the utmost importance on the development of women's football in all areas."

An Irish referee is set to make history as part of the first female led team officiating this month's UEFA men's final.

Wexford referee Michelle O'Neill will join the team at the Super Cup match between Chelsea and Liverpool.

She will assist alongside Frenchwoman Stéphanie Frappart. This will be the first time that a female official is set to take charge of a major UEFA men's final.

France's Manuela Nicolosi will be the other assistant referee with Turkey's Cuneyt Cakir acting as the fourth official.

O'Neill currently referees in the FAI Continental Tyres Women's National League. She is also an assistant referee in the SSE Airtricity League. 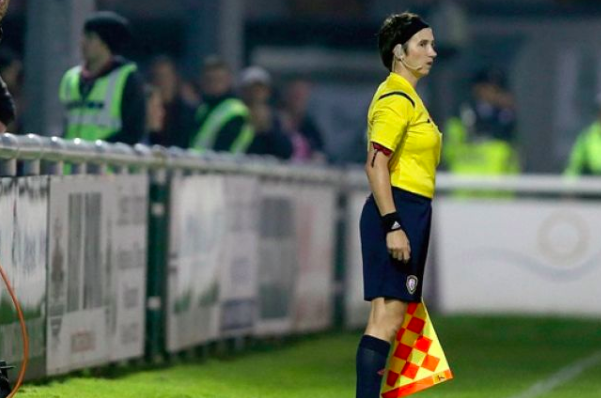 "As an organisation, we place the utmost importance on the development of women's football in all areas," said UEFA president Aleksander Čeferin.

"I have said on many occasions that the potential for women's football has no limits and I am delighted that Stéphanie Frappart has been appointed to officiate at this year's UEFA Super Cup along with assistant referees Manuela Nicolosi and Michelle O'Neill.

"I hope the skill and devotion that Stéphanie has shown throughout her career to reach this level will provide inspiration to millions of girls and women around Europe and show them there should be no barriers in order to reach one's dream."


popular
Tried and tested: I got my eyebrows laminated, and I'm absolutely weak for myself now
Prince William and Kate Middleton 'planning a trip to Ireland' in spring
Temperatures drop to -4 as weather warning is in place for 17 counties
We are absolutely obsessed with this grey teddy coat, and it's just €29 in the Zara sale
Met Éireann has issued an ice and low temperature warning for 17 counties
Samantha Markle has spoken out about Meghan and Harry's decision to pull away from the royals
The €23 New Look dress you're going to want to pick up before everyone else
You may also like
2 months ago
Disappointment for Ireland as Greece equalise in final minutes of Euro qualifier
2 months ago
'We call it our Everest'- Hockey star Lena Tice on Olympic aspirations ahead of a massive weekend
3 months ago
Ciara Mageean's training diary: Three sessions a day, Sunday morning mass and minding the mental side
3 months ago
O'Sullivan and McCabe put on a show in Tallaght to bring Ireland one step closer to Euro 2021
3 months ago
Ireland emerge victorious over Ukraine in tonight's women's Euro 2021 qualifier
3 months ago
Ciara Mageean's honesty is a breath of fresh air for athletes
Next Page