JD Sports has apologised for the way the women's version of the Scotland home shirt was portrayed on their website, following complaints from a parent.

Father-of-two Simon Kemp complained to the retailer after going online to purchase a shirt for his daughter, ahead of taking her to France this summer to see Scotland play England in the World Cup.

The model wearing the women's shirt was photographed posing provocatively, with ripped jeans, whereas the men's and boy's shirt was worn by more traditional football models.

The chain removed the image after being asked to Scottish FA.

.@ScottishFA Looking forward to taking my kids to the Women's World Cup and thought I would buy new shirts for us all. So please explain why the official seller @JDSports has presented the boys and men as athletes, yet the female model is more "traditional" #everydaysexism pic.twitter.com/V2XsVKHiri

"Looking forward to taking my kids to the Women's World Cup and thought I would buy new shirts for us all," said Kemp in a series of tweets to JD Sports. "So please explain why the official seller JD Sports has presented the boys and men as athletes, yet the female model is more "traditional'.

"My daughter plays football too, as do thousands of girls. What kind of example does this set for them? 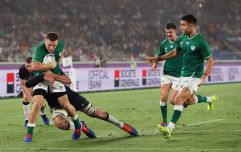 END_OF_DOCUMENT_TOKEN_TO_BE_REPLACED

"You have men’s, women’s and boys’ kit. Not girls’. Message is football is just for boys, and that’s not aligned to Scottish FA's aims of encouraging more girls to play. If junior kits are unisex, call them “children’s” and have female models beside boys."

An SFA spokesman said: "We apologise for any offence that this image caused. As soon as this was brought to our attention we contacted JD Sports to request its removal, which JD Sports immediately acted upon.

"At the Scottish FA, we are absolutely committed to further strengthening equality and diversity in Scottish football and promoting the girls' and women's game across the nation."

JD Sports said that it "occasionally test alternative product styles" on their website to "appeal to the full range of customers".

"While the principal images used for this product online were modelled in the traditional sportswear style, an alternative fashion-led image was tested for a short time," a spokesman continued.

"Following comments from one customer and discussions with the Scottish FA, this image has been removed. The product is now only displayed on our sales channels in the traditional style, and our photography guidelines have been reviewed to ensure this doesn't happen again.

"We remain committed to promoting and supporting the Scotland Women's teams in the build-up to the FIFA Women's World Cup this summer, and apologise for any upset this has caused."

Fair play to them, they changed the main pics today. Now just need to change the thumbnail. Oh and a free flag. pic.twitter.com/v9Lx7J4Kfn

popular
Will Smith admits to 'failing miserably' in 21-year marriage to Jada Pinkett Smith
Katie Price's son Harvey taken to intensive care at risk of organ failure
QUIZ: Can you guess the TV series from the intro lyrics?
Someone has ranked the penis size of men from all over the world
Glee Star Naya Rivera Faces Backlash After Making ‘Race’ Joke
Body found in search for missing Glee star, Naya Rivera
These €40 Lost Stock fashion boxes are helping support factory workers in Bangladesh
You may also like
1 month ago
Scotland to become first country to add LGBTQ+ history to school curriculum
9 months ago
Scotland has banned plastic cotton buds
9 months ago
Scotland bans smacking, becoming first UK country to do so
1 year ago
Scotland officially declares a climate emergency, urges other countries to do the same
1 year ago
Young humpback whale washes up dead on Scottish beach after becoming tangled in rope
1 year ago
Hungover man wakes up in complete stranger's house and their reactions are priceless
Next Page