"Queen of our hearts."

This morning, social media has been awash with support and praise for Katie Taylor following her phenomenal win during last night's fight.

The Bray native was crowned the undisputed lightweight champion of the world following a close match against Belgium’s Delfine Persoon at New York’s Madison Square Garden.

"This is what I’ve dreamed of since turning pro," Taylor said.

"This was always my ultimate goal. To have all five belts and to make history in my sport, this is what it’s all about."

The reaction to Taylor's win has, of course, dominated social media since the early hours of this morning with the likes of Michael D Higgins, Conor McGregor, and none other than Bray Town Centre declaring how proud they are of the boxer.

“My warmest congratulations to @KatieTaylor on reaching the pinnacle of achievement in her sport, becoming the undisputed lightweight world champion.”

Congratulations Ireland’s Katie Taylor! What a battle that was from two warrior women.
It has rematch written all over it.
Rematch in Ireland!
Katie’s Frazier, Delfine Persoon!
Wow 😮

And, compared to some others who will remain nameless, a Proper Champion and Role Model

💚 Undisputed Champion of the World and Queen of our Hearts 💚 🇮🇪 Katie Taylor 🇮🇪 💚
Congratulations @KatieTaylor from @BrayTownCentre pic.twitter.com/BL4SLF9mpz

Persoon was only robbed to the untrained eye, throwing punches doesn't mean she landed them. Persoon's a scrapper, Katie Taylor's a fighter and earned her victory #EireAbu #TaylorPersoon #KatieTaylor 🇮🇪💪🏼

The iconic Mattress Mick even landed in with some words of praise. 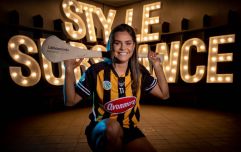 END_OF_DOCUMENT_TOKEN_TO_BE_REPLACED

Following her win, Taylor told RTE that she that she is open to a rematch against Persoon some time in the future, but that right now she wants to focus on other fights.

"We're definitely very open to a rematch, we’ll see what happens down the line," she said. "There’s a lot of big fights out there for me, so I guess we can talk about that later on."

"This is why I sacrifice so much, why I train so hard," she added.


popular
Paul Mescal wore O'Neill's shorts while carrying cans of pink gin so I bought O'Neill's shorts and cans of pink gin
Aldi's velvet stools are just €25 and don't call us basic for wanting a pink one
This amazing hanging egg chair is coming into Aldi next week and go, go go (but safely)!
After days of silence, Scott and Sofia finally comment on the break up rumours
So, William and Harry have a step sister... and who knew?
Lidl launches new pre-mixed gin cocktails, right in time for the weekend
Someone has ranked the penis size of men from all over the world

You may also like
1 month ago
ICYMI: Twitter wasn't prepared for Stanley Tucci's cocktail class and may never recover
1 month ago
Wondering how the Gavin & Stacey crew might cope in a lockdown? Twitter has you sorted
3 months ago
Jameela Jamil has come out as queer on Twitter, and serious respect
5 months ago
Woman shares travel adaptor hack that legit has shaken us to the core
5 months ago
These were the most popular tweets in Ireland in 2019
5 months ago
The Queen gives out to Princess Anne for snubbing Donald Trump and we can't stop watching
Next Page