Roseann described it as the "best experience" of her life to date.

As we prepare to bid adieu to 2018, lots of us are becoming a little reflective and thinking back on what we have achieved over the course of 12 months, but not too many people could say they circumnavigated the world on a yacht.

Yes, at the ripe young age of 24, Donegal native Roseann McGlinchey has achieved the exceptional feat of taking part in the Clipper Round the World Yacht Race.

END_OF_DOCUMENT_TOKEN_TO_BE_REPLACED

In August 2017, she set sail from Albert Docks in Liverpool and returned almost a year later to the same place. Up until a couple of months before leaving, however, Roseann had no experience on a yacht. The race was something she always wanted to take part in and having successfully gotten through the application process she then had to head to Gosport to learn everything from nautical terminology to what to do if pirates hijacked their boat... and we thought we had problems!

Roseann was aboard a 70-foot sailing yacht for the adventure along with 17 other round the world crew members. She told me that each person was tasked with a specific duty that was in keeping with their existing skill set:

This was an aspect of the undertaking that I was very curious about - what did they eat? As good as their delivery service is, surely nautical deliveries are outside of Dominos remit. 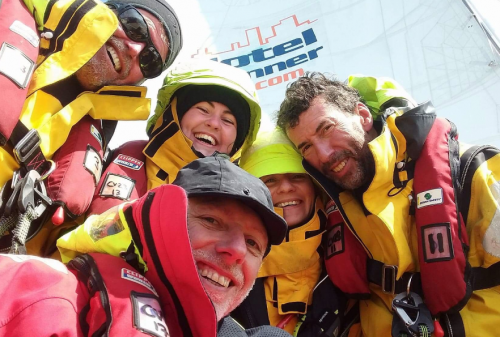 Unfortunately so, but it seems like treats weren't completely off the menu as Roseann said:

"The most common food we ate on board was rice, pasta and potatoes. In the North Pacific where we had freezing temperatures we needed 5000 calories a day so the crew ate a lot of pot noodles, we even had a fork lift in the Chinese supermarket to get them for us!

The crew loved our chocolate that our crew supporter Gerry used to bring from New Zealand and as a treat in really hot conditions we would have surprise ice lollies."

And ladies, if you're thinking of sailing all around the world, just be warned that you can leave the glam squad and technology at home! Phones were disallowed during the race and showers were minimal:

"There was no extra [water]  for showers so this was a bucket of salt water over your head on a sunny day or a rain shower during a tropical storm." 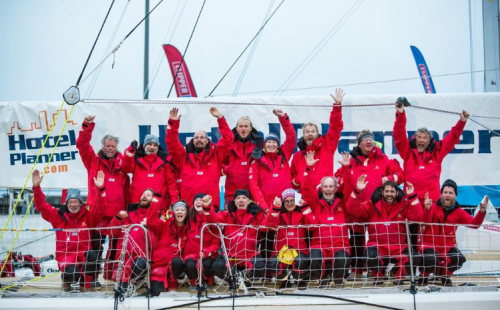 Even though there were tough days on board, Roseann says she wouldn't do anything different:

"This was the best experience of my life to date and every day brought learning."

The achievement seems to have increased her confidence and ability to trust in her own decisions as was tasked with challenges that pushed her out of her comfort zone:

"I became a watch leader, this role meant being responsible for a lot of the boat while the Skipper was asleep including the safety of the crew and our progressing in the race. I had to trust my judgement and become a good leader to a crew of all ages and ability."

Roseann certainly seems like a woman with a great mindset:

"The bad days with no wind taught me patience and the good days brought me memories and friends I will never forget."

Now that's an outlook to consider adopting as we head into 2019! Major congratulations to Roseann.

Girls With Goals || Her · Ep.161: Feeling Peachy - Sharon Keegan of Peachylean on being an absolute BOSS!
popular
Top 10 best staycation experiences in Ireland revealed
Britney Spears' dad Jamie says he is "sorry" to see daughter in pain
Woman escorted from Disney World for "inappropriate" top
Will Britney ever be freed?
All of the Love Island couples that are still together (and those that aren't)
Newborn needs 13 face stitches after being cut during emergency C-section
A BBC documentary on the Peru Two is coming next month
You may also like
3 months ago
Sport Ireland have launched a sports punditry training initiative for women
9 months ago
BBC broadcaster Holly Hamilton: "It feels like the soul has been taken out of sport"
1 year ago
Meet Tiffany Faaee: the first female coach in U.S. men’s professional rugby history
1 year ago
20x20 asked Irish women to post videos showing their sports skills and damn girls!
1 year ago
The Leinster women’s rugby team are set to play a massive game in Twickenham stadium
1 year ago
You can help make history by supporting the Ireland women's soccer team this month
Next Page