As things stand, Aidan Nolan is set to miss Wexford's next two games.

Those games, this Sunday's Leinster final and then Wexford's next game in the All-Ireland series, could conceivably be the biggest two games of his life.

It's been a disappointing week for the Half Way House Bunclody man.

Sent off after the final whistle in Wexford Park, Nolan's offence was abusive language towards referee Fergal Horgan after their draw with Kilkenny. With hindsight, Nolan would have known that the draw was good enough to seal Wexford's place in the Leinster final but without knowing that at the time and with the stadium clock stopped, he made his feelings known to the Tipperary ref that more time should have been played. 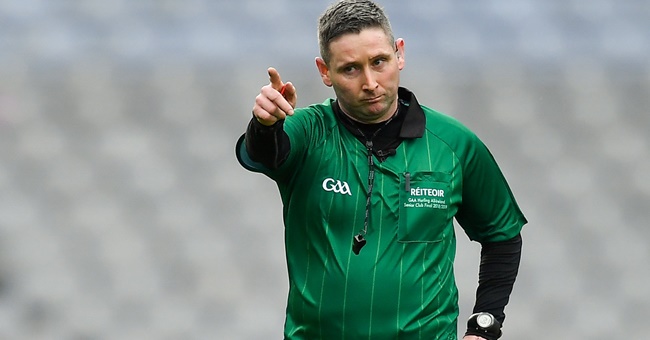 How much he would have given for 20:20 vision. But it gets even worse.

Normally such a red card offence results in only a one game ban, however Nolan's punishment was doubled as a result of it being his second straight red this year.

His first, Wexford fans recall disappointingly, came on the other side of the world in Boston when he was sent off during the Super 11s for a pull on Cian Lynch.

Talk about a disaster.

It certainly is a very unlucky position for the Bunclody player to be in. That's not to excuse or to justify abuse towards a match official - he certainly deserves a suspension on those grounds but the issue is consistency of refereeing and making a habit out of punishing players for such indiscretions.

The Nolan case came up for debate on Corbett and McGrath's Big Build Up this week and it's fair to say the lads had a bit of sympathy for the 26-year-old.

"If he knew then what he knows now, that Wexford were going through with the draw anyway, then he wouldn't have been expressing such emotions, he would probably have been celebrating. I think he just got caught and that was a huge, huge lesson to learn," says Lar Corbett.

Despite the fact that Nolan's first appeal was rebutted by the CHC on Tuesday afternoon, Derek McGrath feels they will go down the avenue of re appealing the decision.

"For me, I'd imagine an appeals process will be followed trying to get it reduced to one game, because it seems a very harsh scenario for a guy to possibly miss out on a Leinster final, and then not to be involved until the All-Ireland final if they got there. Especially given the impact Aidan Nolan has had in the last couple of years on Wexford..."

The lads feel it opens up a whole new debate as regards the consistency of refereeing.

"It raises a more pertinent question though about the refereeing that night, Fergal Horgan recognised the volatile nature atmosphere that it was and he went along with it which I welcomed, it's just the consistency like, will they be refereed in the same manner when you're away from Wexford Park..."

Again though, it all comes back to what was said between the player and the referee.

"Players never know what way games are going to be reffed," says Lar Corbett on this subject.

"They have to wait until the first five minutes to find out if a certain ref is letting it go and then they can hurl away. Or it could be, hold on a minute now, we have to be conservative here because they're blowing for everything. Someone has to make a decision and say what is the standard...Sometimes when a free is given then and a player has a question for a referee about it, the very minute the referee hears the English language, it's up ten yards..."


popular
Holly Willoughby wore the most divine polka dot mini dress last night, and we need it
Brides to be, this Monsoon dress would be perfect for the day after your wedding
Say hello to the flattering €30 New Look dress that you're definitely going to want in your spring wardrobe
Netflix have announced the release date for the new series written by Downton Abbey creator Julian Fellowes
We need these adorable €14 Disney-inspired pyjamas from Penneys in our lives right now
BRB, running to Penneys for the €19 trousers that look like they cost ten times the price
Say hello to the €18 vintage style bikini from Penneys that has us wishing for summer
You may also like
6 months ago
Corbett & McGrath's Big Build-Up: Tipperary to make Kilkenny eat their words
6 months ago
Derek McGrath opens up on becoming the next Waterford manager
6 months ago
Hurling team of the weekend
6 months ago
That Lee Chin had to walk off that pitch today as a loser is bare-faced cruel
6 months ago
'Tipperary have been questioned... Anyone looking for answers got them today' - Noel McGrath
6 months ago
Tipperary owes a debt to the colossal Ronan Maher
Next Page