Online retailer ASOS has come under extreme criticism this evening, after referring to model and bodybuilder Jodie Marsh as a man in an ill-advised tweet today.

The incident began when a male customer of the clothing giant sent a tweet to the official @ASOS account asking "Would you mind employing a model who's built like a man so anyone who actually lifts can buy clothes that fit from you?".

The account replied by sending the below response, containing a photo of glamour girl Marsh with the caption 'This do?'. 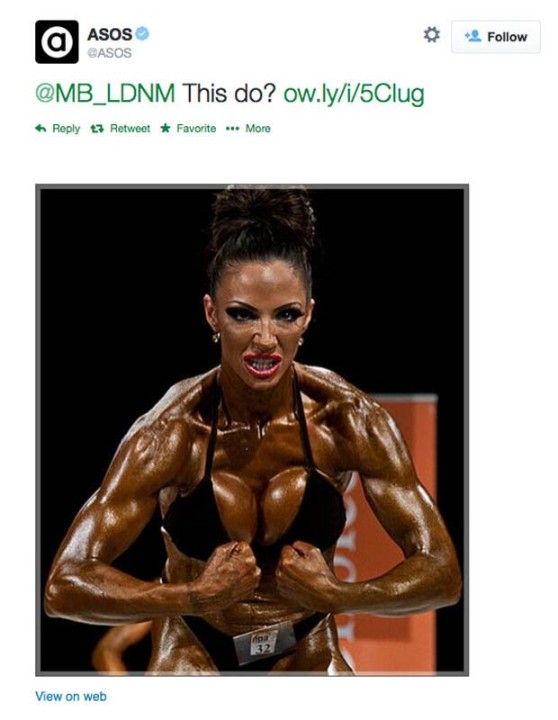 Marsh was understandably outraged by the public slur, sending a series of tweets outlining her distress at the insult and accusing the company of bullying her.

So @ASOS are saying I like look a man. I am utterly horrified at this comment. Totally unacceptable from such a large company - BULLIES!!!!!

Check my last RT to see what bullies @ASOS are!!!! Talk about being slapped in the face. This is disgusting & I am horrified. I'm gobsmacked

I will be making a formal complaint to @ASOS head office over this. No one should have to suffer this. They've just lost a loyal customer 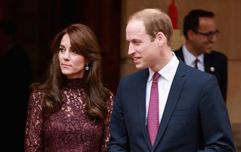 END_OF_DOCUMENT_TOKEN_TO_BE_REPLACED

The comment quickly drew ire from the online community, with commentators calling the act "disgusting", "appalling" and "shocking".

ASOS later apologised for the tweet, saying "you're right, we should never have tweeted that. We never meant to hurt your feelings and we're really sorry".

However, the model has refused to accept the apology.

. @ASOS that lame apology doesn't cut it. I think my #fitfam will agree that saying a woman who lifts weights makes her look manly is NOT ON

Girls With Goals || Her · Ep.153: Scholarship Squad - We chat to Facebook's Claire O'Hara about our Smurfit Scholarship fund.
popular
Matthew Perry's dad was a character on Friends and how did we not notice?
Irish people urged to send a hug to loved ones on National Hugging Day in aid of Ronald McDonald House
Gwyneth Paltrow's vagina candle "explodes" in woman’s living room causing fire
Robbie Williams "fairly sick" with Covid while holidaying in Caribbean
Gilmore Girls star says he didn't storm the Capitol, praises those who did
Josepha Madigan compares issues around schools reopening to Mother and Baby Homes
Someone has ranked the penis size of men from all over the world
You may also like
1 year ago
Turns out, this colour of wine gives you the WORST hangover
2 years ago
Love a bit of gossip? It might not be as bad as you think
4 years ago
Lily Allen has revealed that she was stalked for seven years
4 years ago
Pretty Little Liars actor Brandon Jones could be facing over five years in prison
4 years ago
Gwen Stefani Receives Massive Backlash After "Insulting" April Fools' Prank
4 years ago
Katie Price Names And Shames The Twitter Trolls Bullying Her Son Harvey
Next Page