Jennifer Lawrence has harsh words for critics of her 'revealing' dress

"I don't know where to start".

Jennifer Lawrence has had her say after a number of people criticised the outfit she decided to wear at a photocall for her latest film Red Sparrow.

The dress in question, a Versace number, has been described by some as unsuitable attire for the cold weather and Jen is having none of it.

Images of the photocall circulated online yesterday showing the actress and some of her male colleagues standing on a rooftop.

The men are all wearing coats and heavy layers while the dress worn by the Hunger Games star has been described as 'revealing' by some social media users.

This led to a number of people saying this is proof of the double standards in Hollywood etc and things completely spiralled from there.

This led Jen to release a statement via Facebook where she makes her feelings on the subject known. 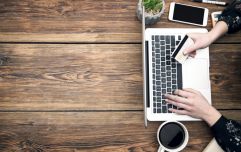 Doing a lot of online shopping right now? An Post says it will keep deliveries coming

END_OF_DOCUMENT_TOKEN_TO_BE_REPLACED

The 27-year-old said that the whole matter was ridiculous and she's offended by many of the ensuing comments.

She went on to say that the dress was fabulous and she wasn't going to cover it, she was only outside for five minutes and that she would have stood in the snow for that dress.

The actress also makes the important point that what she wears is her choice and standing in the cold is her choice.

You can see it in full below.

'Wow. I don't really know where to get started on this "Jennifer Lawrence wearing a revealing dress in the cold" controversy. This is not only utterly ridiculous, I am extremely offended. That Versace dress was fabulous, you think I'm going to cover that gorgeous dress up with a coat and a scarf? I was outside for 5 minutes. I would have stood in the snow for that dress because I love fashion and that was my choice.

'This is sexist, this is ridiculous, this is not feminism. Over- reacting about everything someone says or does, creating controversy over silly innocuous things such as what I choose to wear or not wear, is not moving us forward. It's creating silly distractions from real issues. Get a grip people. Everything you see me wear is my choice. And if I want to be cold THATS MY CHOICE TOO!'.

popular
QUIZ: How well do you remember The Princess Diaries?
Will Smith admits to 'failing miserably' in 21-year marriage to Jada Pinkett Smith
Easy breezy: 5 comfy summer dresses you'll want to live in right now
Security footage released of Naya Rivera as search is updated to recovery mission
QUIZ: How well do you remember the 2005 movie Pride & Prejudice
Glossier: A first-time buyers guide to this cult beauty brand
James Franco Has Opened Up About His Relationship With Lana Del Rey
You may also like
4 days ago
Gardaí seeking public’s assistance in tracing 23-month-old Jasmine Arshad
4 days ago
Broadway actor Nick Cordero dies following Covid-19 complications, aged 41
1 week ago
Ghislaine Maxwell, former girlfriend of Jeffrey Epstein, arrested by the FBI
1 week ago
"I never thought it would be cancer": Stage 4 melanoma patient recalls receiving her diagnosis
1 week ago
Harvey Weinstein victims to receive $19 million settlement
1 week ago
The killing of Elijah McClain: here's what you should know
Next Page