Meghan has another change of outfit and oh wow, we LOVE this one

As you may be aware, Prince Harry and Meghan Markle are in Dublin on a royal visit and have been checking out some of the sights our capital city has to offer.

They visited Áras an Uachtaráin this morning, meeting with Michael D.Higgins and his wife Sabrina before moving on to Trinity College to see the Book of Kells and have a quick meet and greet with the crowds that gathered.

Meghan and Harry have just arrived to Trinners where they’ll go have a look at the long room before meeting some members of the public ? pic.twitter.com/OiF7jEsZu6

Of course, all eyes were on Meghan, who had three outfit changes in total and although she chose a green dress earlier, we're big fans of today's second ensemble.

Meghan is no stranger to a sharp suit, remember the Alexander Queen two-piece she wore previously, and we are loving this slick look.

The tailoring is perfection and by choosing court shoes and a white shirt, it's a classically elegant look. 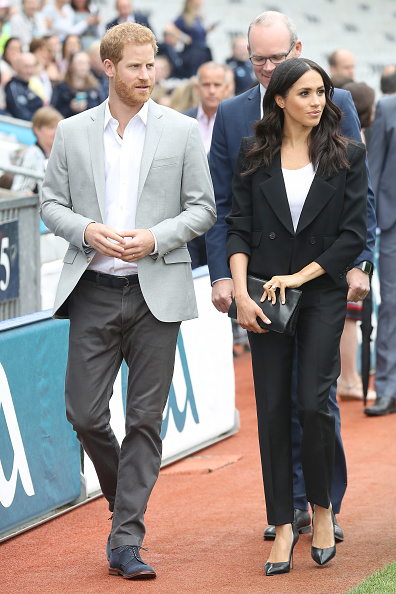 Just stunning and a moment for Harry's grey blazer and smart trouser choice.

The details of her look haven't yet been revealed but given that she's been wearing a lot of Givenchy lately, we wouldn't be surprised if it was from the French designer. 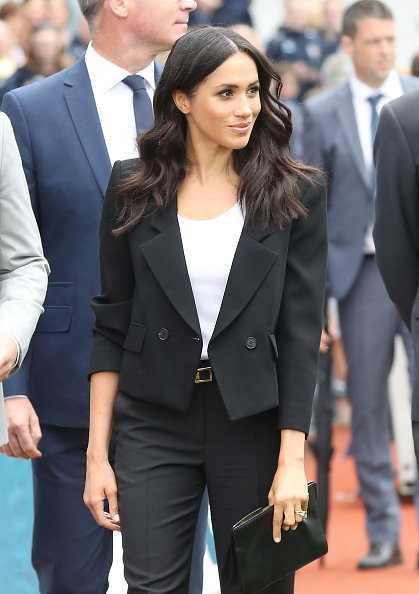 Here's hoping we get to see her in a third outfit later today...

popular
'Beard-baiting' is now apparently a dating trend - and we're all for it
Curtain bangs are trending - here's everything you need to know
10 women on the relationship deal-breakers they learned the hard way
QUIZ: How well do you really remember the first episode of Sabrina The Teenage Witch?
Rose Leslie and Kit Harington share baby news with super cute photo
QUIZ: Can you name all 32 counties in Ireland in under 4 minutes?
15 tattoo ideas you'll adore if you love the sea
You may also like
5 days ago
Gardai investigating "all circumstances" as young woman is found dead in Dublin apartment
2 weeks ago
Two Irish spots named among the best pizzerias in Europe
3 weeks ago
Dublin’s first cocktail village has opened in Roe & Co Distillery. See you there?
2 months ago
3 lovely spots you can get yourself a boujie lunch in Dublin
2 months ago
DIG IN, the world's first 'Art Diner' has just opened on Dublin's Camden Street and it looks fab
2 months ago
Know someone from Dublin who is living abroad? They might need this candle
Next Page