It's gotten quite the reaction.

Beyoné visited her mother Tina Knowles in New York yesterday and unsurprisingly, her outfit was pictured by a number of paparazzi photographers.

For some reason, maybe because there's a LOT of pink involved, the outfit has everyone talking with people expressing their thoughts on Twitter. 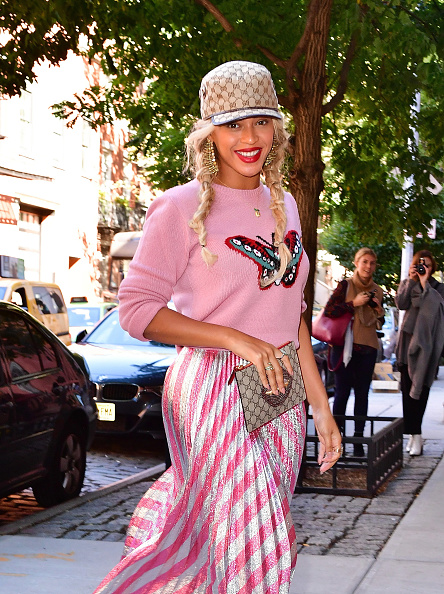 Some are suggesting Queen B should sack her stylist, others think that she's dressing herself and that's cool.

Either way, the pink ensemble, all Gucci FYI, has everyone talking.

Here's what the Twitterverse had to say:

Beyonce Honestly Looks Like A Hot Mess In Her Head To Toe Pink Ensemble https://t.co/udxPBCdiZP pic.twitter.com/6t8knWMt2I

Beyonce looks pretty in pink as she visits mum Tina in New York: https://t.co/riTNWcgW8r via @YouTube

Beyonce's style stresses me out. I wish she would get a stylist for every day dressing ?

@Beyonce wears pink on Wednesday & you can't sit with her #ootd pic.twitter.com/BW5r7CNYnV

Does Beyonce need to sack her stylist? Singer opts for an outlandish pink outfit as she as... https://t.co/cj24K0jq1L pic.twitter.com/P3dYKgEzG4

popular
You stars Victoria Pedretti and Dylan Arnold spark romance rumours
Viral TikTok shows how to keep warm wearing tights in winter
Channel 4's Breastfeeding My Boyfriend doc criticised for contributing to stigma
Japanese princess gives up royal title to marry college sweetheart
Brian Laundrie parents 'to cremate body with no funeral' amid mystery over cause of death
New period drama A Very British Scandal starring Claire Foy is coming to TV soon
Late Late Show viewers are not happy with Ryan's questions for Billy Connolly
You may also like
5 days ago
You's Penn Badgley and Cardi B are fangirling over each other on Twitter
6 days ago
Gogglebox's Paige Deville never wants to speak to mum again after quitting show
1 week ago
Irish The Chase star hits back after fans claim he loses on purpose
2 weeks ago
Woman charged fee for "brief emotion" during mole removal
3 weeks ago
9 of the best memes from when Instagram and WhatsApp were down
3 weeks ago
Facebook, Instagram and WhatsApp down as outage hits for hours
Next Page