It's a Mean Girls reference, c'mon.

Paul Mescal is an A-list celebrity now. Yes, he is. It's not worth arguing.

The Maynooth native was catapulted into the harsh spotlight of sudden fame and thirsty fandoms following the release of the touching, emotional, and all round incredible Normal People.

Mescal stars as Connell in the series, and although audiences have been quick to applaud his incredible performance throughout the Sally Rooney adaptation, they've also been fairly hung up on Mescal himself - most notably his penchant for neckwear and lockdown fashion choices.

Earlier this week, Paul was spotted strolling around London wearing some O'Neill's shorts, an Adidas top, and a pair of shades.

He was also carrying two cans of pink gin, a bottle of Crabbies, and a bag of prawn cocktail crisps.

The images in question can be viewed in all their glory here (click through for the full #look):

No man has ever done so much for O'Neills in such a short space of time pic.twitter.com/PClnn32u6V

Sunday morning at a festival chic? Maybe. Daytime in Workman's vibe? Could be. A look that not one of us would ever be even remotely into if it wasn't Paul Mescal sporting it? Honestly, yes. 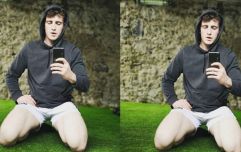 END_OF_DOCUMENT_TOKEN_TO_BE_REPLACED

The lad's been trending on Twitter every other day at this stage - and fair play to him. He has become the Covid-19 distraction that the world needs, dressed in O'Neill's and gasping for a Gordon's.

it would be disingenuous to claim that paul mescal's universal magnetism is down to "vibe" alone... but i can't remember the last time i witnessed a vibe this gigantic. you don't drag on a fag or grasp a crabbies with this much purpose unless you KNOW you're on some king shit pic.twitter.com/3F85n9KqXb

The worst thing about Paul Mescal becoming an overnight Irish sex symbol is that it has normalised GAA lad culture. A crying shame

I think the funniest thing about the Paul Mescal pic is the non Irish accounts critiquing his outfit choice like this was some kind of fashion statement and not recognising that he’d likely been ordered to go to the shop and threw on whatever was handiest https://t.co/8BhwMM0BEy

My new goal in life is to be as fucking cool as Paul Mescal in this jacket, carrying a cider, two gin & tonic cans, and a bag of prawn cocktail crisps pic.twitter.com/uV6dAGnJJb

Paul himself even got in on a bit of the action - albeit retweeting a Rory's Stories tweet but listen, we won't hold it against him.

This newfound adoration for Mescal's, ahem, bold fashion choices comes after the actor announced that he was raffling off one of his personal chains in aid of Pieta House.

“I am delighted to be able to help Pieta by raffling off one of my own chains," said Paul.

"Pieta is a cause very close to my heart, having experienced loss due to suicide in my local town while growing up.

"Suicide and depression are themes directly linked to Normal People especially around episodes nine and 10 which is why I want to help those in similar situations."

You can find out more, or make a donation, here.

popular
Christmas FM returns tomorrow, July 9... No, really
H&M to close 170 stores this year due to dropping sales
QUIZ: Can you name the Keanu Reeves movie from just the screenshot?
QUIZ: How well do you remember The Rugrats Movie?
Womb stories: Bodyform's latest ad is a triumph for women's health portrayal
Staycation: 7 gorgeous glamping spots for your Irish summer getaway
"Real urgency": Extend Maternity Leave campaign continues to lobby outside Dáil
You may also like
5 days ago
Normal People season two? Lenny Abrahamson would like to revisit series "in five years"
1 week ago
QUIZ: Can you name these minor Normal People characters?
2 weeks ago
There'll be a Normal People special on RTÉ's Comic Relief this week
3 weeks ago
'It's uncomfortable': Paul Mescal wants you to know he is not Connell from Normal People
3 weeks ago
8 movies about love to fill the Normal People-shaped hole in your heart
1 month ago
Paul Mescal's chain raffle raises over €70k for Pieta House
Next Page