Well... it surely is different?

Usual style queen and OTT dresser, Sarah Jessica Parker opted for a much more laid back and almost "last minute" look when she took to the red carpet this weekend for the 2018 Tribeca Film Festival in New York.

Arriving at the event, the Sex And The City star wore a grey cardigan, turned up grey slouched jeans and a black sock boot, which overall actually looked quite effortless - but it was her choice of accessories that were a little bit more surprising. The 53-year-old chose to wear a sports rucksack and carry a book as she posed for the paps. 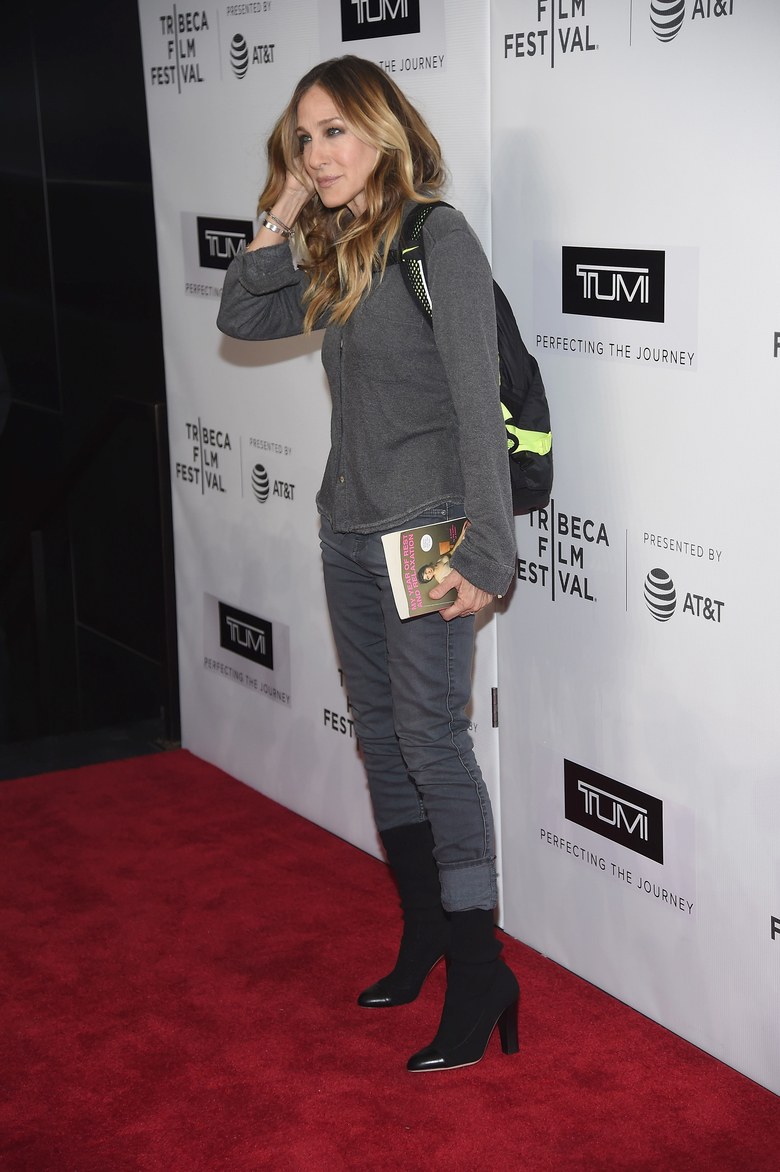 Now, we aren't talking one of the "cutesy" backpacks that you see everywhere now, no, we are talking one like you used in 1st year of secondary school to carry your unmerciful load of books.

And the book in her hand, which at first we thought was a clutch is actually, just a book (“My Year of Rest and Relaxation” by Ottessa Moshfegh, in case you were wondering).

Now although the accessories were quite bizarre for the setting, who knows, perhaps SJP is beginning to set new trends that will take us months to realise and follow? Hmm or perhaps she is simply exhausted from the public "tiff" she has been having with former cast mate, Kim Cattrall.

Two months ago, Cattrall posted an Instagram image saying that she doesn't need Sarah's love or support following Kim's brother going missing. Cattrall also said that her and SJP were never friends during Sex And The City and called the star "toxic".

Although Sarah denied there was no problem between them months ago, she reiterated her words speaking to Vulture last week saying:

"I’d just like to remind everybody that there is no catfight. I have never uttered an unkind, unsupportive, unfriendly word, so I would love to redefine it.

"I’ve always held Kim’s work in high regard and always appreciative of her contributions. If she chooses not to do the third movie, there’s not a lot I can do to change her mind and we must respect it."

Hmmm... looks like we will just have to make do with SATC 1 and 2, as a third installation is most certainly not "en route".  you can read all about it here.

popular
Late Late Show viewers are not happy with Ryan's questions for Billy Connolly
10 items from Zara for the perfect autumn capsule wardrobe
Former detective chief says Brian Laundrie discovery is "strange"
Paris Hilton says she was "slapped" and "strangled" as a teen in youth care
This hot water bottle pouch is perfect for menstrual cramps
Strictly microphones pick up gas audio from the contestants
Festive feels: Dominos has launched their first-ever Christmas-themed pizza
You may also like
23 hours ago
Apparantly, there is one colour you should never wear at a job interview
2 weeks ago
Style Watch: This Irish boutique is selling stunning and affordable pieces online
2 weeks ago
Tidying up: 3 TikTok organising hacks that'll change your life (and wardrobe)
3 weeks ago
Penneys launches 'posh' collection to help you build the perfect capsule wardrobe
3 weeks ago
We had a sneak peek at the the new Sostrene Grene collection, and hello hygge
3 weeks ago
Love Island's Liberty is creating her own collection for In The Style
Next Page