It’s hard to feel good about yourself when all the most popular supermodels – Kendall Jenner, Gigi Hadid, Karlie Kloss – all look the exact same.

White skin, long hair, long limbs, big eyes and plump lips seem to be the standard to be deemed ‘beautiful’.

Society doesn’t ask for much, does it? 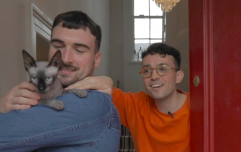 James Kavanagh showed us his art collection and there's LOTS of nipple!

END_OF_DOCUMENT_TOKEN_TO_BE_REPLACED

Selfridges, the UK department store, has contributed to the body positivity movement by releasing a video shedding light on beautiful women of all shapes, sizes and colour.

Titled ‘Incredible Machines’, the video was released to celebrate the opening of their Body Studio.

The new collection promises to include lingerie, hosiery, loungewear, and sportswear and it is incorporated with the Selfridges 'Everybody' campaign.

The video films the women exploring the relationship the women have with their bodies and the struggles they’ve had to overcome to accept who they are now.

We hope to see more campaigns like this in the near future.

popular
Tributes paid to Limerick based blogger and model Patrick McLoughney
This TikTok hack shows you how to pack more despite baggage allowance
Another Strictly star has pulled out of the live show
This is how much 91-year-old Queen Elizabeth drinks every day
Simon Harris gives three urgent options for easing restrictions next week
Lidl closing early this weekend to thank staff for hard work
Not going anywhere: Baby names set to stay popular for the next decade
You may also like
1 week ago
9 of the best memes from when Instagram and WhatsApp were down
1 week ago
Facebook, Instagram and WhatsApp down as outage hits for hours
3 weeks ago
Hallelujah! Britney Spears returns to Instagram
1 month ago
Why did Britney delete her Instagram?
1 month ago
TikTokers flood Texas abortion whistleblower site with Shrek memes and porn
3 months ago
TikTok star sentenced to 10 years in prison over "human trafficking"
Next Page