There's a harsh new dating app on the market

There's a new dating app in town which promises to be more fun and something entirely different.

If by different they mean brutal with violent connotations they are correct. 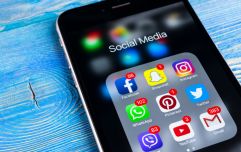 Look out, Tinder! Facebook has announced plans to launch a dating service

END_OF_DOCUMENT_TOKEN_TO_BE_REPLACED

In their own words the company say:

''Dating apps aren't fun enough. Imagine every time you met three people, you’d have to choose which of them you’d f*ck, marry or kill. Guess what? Now you can do that in a fun way. By yourself or with your friends.''

They go on to explain each of the choices and what they essentially mean.

''F*CK: The one suited for a one night stand but that only would introduce to your parents if you want to piss them off.

MARRY: This one's good for the long term. Cute and all, and seems like a nice person.

KILL: Not even if you were the only two survivors of a zombie apocalypse. In fact, you would rather f*ck or marry a zombie.''

They even included a nifty video explaining the concept.

According to Memo, the app already has over 6,000 users and 90% of those users apparently use it daily.

You must be over 18 and can join with your Facebook details, and add two very important rules.

''Don’t be a creep/asshole (seriously, you’ll get banned for life).

Keep in mind that the killing is figurative.''

popular
Woman spots dead husband in promo video for Indian restaurant
Redhead girl stabbed with scissors at school 'because of colour of her hair'
Where to watch 2023's ten Best Picture Oscar nominees
"I feel like I lost myself": Nathalie Lennon on her mental health struggles and her latest project with Pieta
Gwen Stefani reportedly pregnant with baby number four
Anne Hathaway shares disappointing news about The Princess Diaries 3
Molly-Mae Hague fans think they officially know her baby's name – and it means cloud
You may also like
6 days ago
Netflix is about to launch the Avengers Assemble of reality dating shows
3 weeks ago
Emily Ratajkowski says she's done with dating men who can't handle a strong woman
3 weeks ago
Straight woman and gay man 'make marriage work' with weekly feedback
1 month ago
How to cope with 'single-shaming' over Christmas, and why it shouldn't be a thing
2 months ago
Cher confirms she's in a relationship with 36-year-old music producer
3 months ago
This Match.com ad has just been banned after it was deemed "sexist" and "offensive"
Next Page