She's also going to walk down the aisle with a koala. Fair play.

Bindi Irwin is planning to honour her late father, Steve Irwin, at her upcoming wedding ceremony.

The Animal Planet star will be marrying Chandler Powell at the Australia Zoo where the pair first met and also where they got engaged.

And aside from the specific location - and the fact that she'll be walking down the aisle with a koala - Bindi also has plans to include her late father in the ceremony.

“I really want to include Dad on the day and make sure that he is with us in some way,” she told PEOPLE Magazine.

“Just little bits of Dad that will make it feel like he’s there with us.

“We’ll have candle lighting ceremony. So we’ll be able to all get up as a little family and light a candle in his honour and share a few words on what an amazing dad he was and still is.”

Dad, You would be so incredibly proud of Robert. He has been such an amazing support during this beautiful new life chapter. I know you’d be beaming with pride when the time comes that he walks me down the aisle. I wish you could be here for these moments, but I know that your spirit lives on in us ❤️

Steve Irwin passed way in 2006 following a stingray attack off the Australian coast while filming a new documentary series. 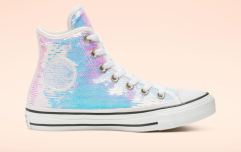 Converse has a wedding range and it is seriously gorgeous

END_OF_DOCUMENT_TOKEN_TO_BE_REPLACED

“We’re all very emotional people, but Dad, anytime we would achieve anything as kids, he would just start crying.

"I remember the first time I ever filmed with little ants on camera, I was telling the camera that these little ants are so important to protect and he just started crying.”

I love you. Forever. @chandlerpowell

Bindi announced her engagement to her boyfriend of six years earlier this summer.

"I’m not sure how many people have walked down the aisle with a koala, but we may be setting some new trends for weddings from here on out," she said.

"It's where we met and where we got engaged so it only makes sense that we'd have it at Australia Zoo. I think this wedding is going to be unique because it's going to be at the zoo with tons of animals."

The couple also revealed that Bindi's big brother, Robert, will be walking her down the aisle on the day.


popular
David Beckham shared his dinner on social media and we really wish he hadn't
Disney Plus announces new titles coming in April
10 summmer dresses we are ordering this week to cheer ourselves up
#Covid-19: Kim Kardashian says lockdown has made her realise she doesn't want more kids
19 brilliant books to read while you're social distancing
5 new additions to Netflix to spend your weekend watching
Katy Perry reveals the gender of her first child with Orlando Bloom
You may also like
1 week ago
'Love wins': Bindi Irwin shares first photo from her wedding to Chandler Powell
1 week ago
Bindi Irwin and Chandler Powell have reportedly gotten married
1 month ago
'You're always with me': Bindi Irwin shares sweet tribute to late father Steve Irwin
2 months ago
The Irwin family has helped over 90,000 animals during Australian bush fires
5 months ago
Bindi Irwin is going to walk down the aisle with a koala on her wedding day
8 months ago
Bindi Irwin has announced she has gotten engaged and just LOOK at her ring
Next Page