It would almost be romantic if he didn't, I dunno, rob a bank?

A man robbed a bank in Texas recently in an attempt to pay for his wedding the following day.

Heath Bumpous threatened a cashier in the Citizens State Bank in Groveton on Friday, stating that he had a gun and that he needed money.

Bumpous, who is 36-years-old, said that he needed the cash to pay for a wedding venue and wedding rings the next day.

Armed with the cash, Bumpous fled by car. He was later called by his fiancée who had seen his photo the police had shared on Facebook.

He was convinced to turn himself in.

"He basically stated that he was getting married tomorrow so he didn't have enough money for a wedding ring that he wanted to buy and he needed to pay for the wedding venue," Sheriff Woody Wallace said in a statement via Facebook Live. 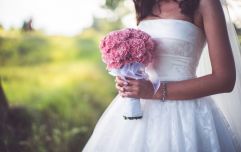 Couple get divorced three MINUTES after getting married

END_OF_DOCUMENT_TOKEN_TO_BE_REPLACED

"His fiancee, who he was supposed to marry, was able to get in touch with him on the phone when she saw our post on Facebook.

Bumpous was arrested and remains in police custody. He has been charged with aggravated robbery.

Sheriff Wallace said that he was not aware of any wedding taking place the following day.

popular
Two women survive 15 hours in the water in Galway Bay
This no bake 'Chocolate Refrigerator Cake' recipe has us drooling
Irish influencer Lisa Jordan reveals her little boy's name and it's so cute
It turns out we're all peeling oranges wrong and this madness has to stop
Set up the WhatsApp group! There's a new 'Rosé inspired' afternoon tea in town
Power ponytails and perfect messy buns! Here's some TikTok hair hacks to try at home
How to cope in this humidity: From sleeping better to dealing with frizzy hair!
You may also like
1 week ago
Daisy Coleman from Netflix's Audrie & Daisy has died, aged 23
1 week ago
Concerns over extradition of Madeleine McCann suspect Christian B
1 week ago
11 new Emperor penguin colonies discovered in Antartica
1 week ago
Bewley's is set to open its doors... again!
2 weeks ago
Staycation scams: Warning issued for home holiday makers this summer
2 weeks ago
104 Pandemic Unemployment Payments cut following airport checks
Next Page