Last year, Princess Eugenie got married and she wore a nice wedding dress.

She then went to her wedding afters and wore an even nicer second wedding dress.

It was long, it had a train, it was silky and the fit was ridiculous. Essentially, she looked like an absolute goddess and neither we nor anybody else in the UK or Ireland was worthy.

My 28th year was the best one yet. Now to being 29...Thank you for all the birthday wishes.

And, as it turns out, we're still not, because a new, never-before-seen, exclusive, surprise photo of Eugenie in her second wedding dress has emerged.

And Jesus Christ, it's something else.

Zac Posen, who designed the custom made gown for the princess, shared the photo of himself tending to Eugenie's train on his Instagram account.

Every now and then you meet somebody who just knocks your socks off. This last year I got to know a young lady who possessed natural elegance, a heart of gold and sophisticated humor. My studio and I had the honor (and the best time) collaborating with her on her special gown. Best of all she is dedicated to using her privilege to help our world and its people with her project @the_anti_slavery_collective. Happy Birthday! @princesseugenie ✨ 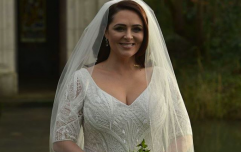 END_OF_DOCUMENT_TOKEN_TO_BE_REPLACED

To mark the royal's birthday, he said that he had been honoured to collaborate with her and her "... natural elegance, (a) heart of gold and sophisticated humour."

The designer also said that Eugenie had "knocked (his) socks off" and commended her campaign, the Anti-Slavery Collective, for shining a light on slavery and its global impact on young women.

The couple's wedding outfits have since gone on display at Windsor Castle, featuring an audio guide recorded by Eugenie discussing the details of both her wedding dresses.

popular
There's a Harry Potter themed Airbnb in Roscommon and we just need to visit
Lidl launches own fake tan and it'll only set you back €3.99
Staycation: 7 gorgeous glamping spots for your Irish summer getaway
QUIZ: How well do you remember The Rugrats Movie?
Here's what happens on every day of your menstrual cycle (roughly)
From blonde to brunette - 6 things I wish I knew before going back to my roots
Someone has ranked the penis size of men from all over the world
You may also like
5 months ago
THEIA designer Don O'Neill on this year's new bridal trends - and the surprising look that's out for 2020
5 months ago
Monsoon has launched a collection of affordable wedding dresses, and they're dreamy
6 months ago
The gorgeous wedding dress trend that's guaranteed to prove popular with 2020 brides
8 months ago
Grainne Seoige spills details about her wedding dress on the lead up to her big day
8 months ago
Rafael Nadal got married at the weekend, and his bride looked like a full on PRINCESS
8 months ago
Kate Wright and Rio Ferdinand got married last week, and the wedding dress was UNREAL
Next Page