Five years after their characters married on TV show Revenge, Emily VanCamp and Josh Bowman have tied the knot.

Emily, who played Emily Thorne on the hit show, and her former co-star Josh, who played Daniel Grayson, fell in love playing opposite one another.

Their characters wed on Revenge in December of 2013 - and the couple said 'I do' over the weekend in a ceremony in the Bahamas, five years later to the day.

She accessorised with a matching lace veil and a simple string of pearls.

Josh looked every inch the Hollywood actor in a classic black tux.

"Thank you to all of our friends and family who made their way to celebrate with us!" the bride wrote on Instagram, sharing photos from the day.

"We are eternally grateful."

Emily and Josh officially began seeing one another in 2012, a year after Revenge began. 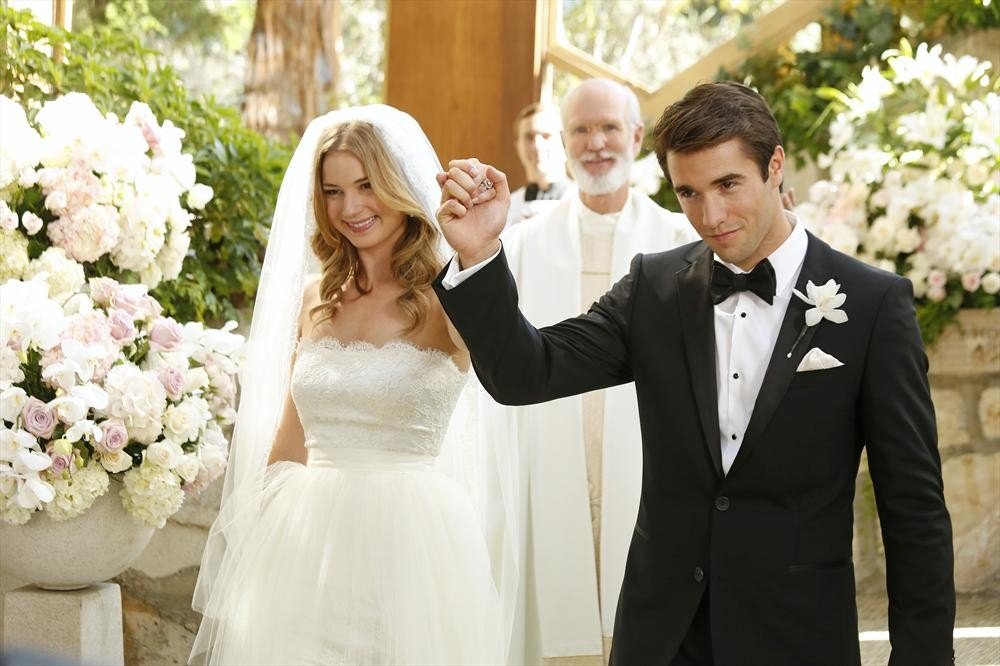 Emily and Daniel's wedding on Revenge.

They announced their engagement in May 2017. Emily revealed that Josh had gotten down on one knee during a hike.

"We were in nature on a hike kind of doing what we do, it was very, sort of, us. So yeah, it was great, beautiful."

popular
Shawn Mendes (24) is reportedly dating Dr Jocelyne Miranda (50)
Brighten up your Christmas with these affordable festive lights, coming to Lidl next week
Apparently this is the best date to put up your Christmas tree
Irish wellness brand cancel Cork pop-up following explosion on ship full of stock
Why Are Men so Obsessed With Boobs? The Answer is Pretty Surprising...
Lauren Graham shares who she thinks Rory's baby daddy is
Billy Connolly Has Harsh Words With Russell Brand, After Brand Asks a Woman to Flash Him...
You may also like
1 week ago
Zoë Kravitz confirms that there won't be a third season of Big Little Lies
2 weeks ago
Here's how to watch The White Lotus in Ireland
2 weeks ago
The Crown stars hit the red carpet for season 5 premiere
2 weeks ago
WATCH: The trailer for Dead to Me is here
3 weeks ago
Netflix reveals full line-up of new shows and movies arriving in November
3 weeks ago
The trailer for Firefly Lane season two is here
Next Page