There are fewer things worse in this life than having a hair-based disaster.

Whether it's due to the rain, the humidity, or your inability to remember to wash your bleach out after two hours leading to inevitable loss of strands, it's something nobody can be expected to get over in a hurry. END_OF_DOCUMENT_TOKEN_TO_BE_REPLACED

And as of today, we can add sticking a pen in your hair and having the ink leak out too, because apparently that's a thing that can happen and the result is fairly grim.

Canadian hairdresser Kelly O'Leary-Woodford shared a photo recently of a client of hers who came into her just a few days before her wedding with the following issue.

Kelly wrote that the client had had her pen stuck in her ponytail when it burst leaving her with a massive splotch of ink running through her blonde hair.

She said that the issue was fixed pretty quickly using some lightener but still, we can't imagine heading in to most hairdressers in this country with a similar problem and it being resolved so quickly - or without severe judgement from whoever was sorting you out. 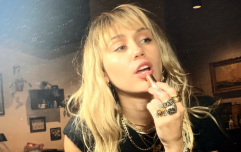 END_OF_DOCUMENT_TOKEN_TO_BE_REPLACED

Hair disasters aren't the only things that Kelly posts on her Instagram page though.

The rest of the images are decidedly less distressing, depicting glorious dye jobs and colour coordinations that would make even the dullest of hair delighted for a brief period of times.

They're fairly stunning and you can check out the rest of Kelly's work here.

Girls With Goals || Her · Ep.151: 'A Story Shared' - Aoife P. Rafter on blogging during a pandemic and living with CF
popular
I'm A Celeb end date confirmed as series wraps up early
Roz Purcell apologises for error with new clothing line amid sizing criticism
The way Diana told William about Charles's affair with Camilla will break you
Here's what happens on every day of your menstrual cycle (roughly)
Irish sustainable clothing company remove all stock from website for Black Friday
Apparently, this is the reason behind Chris Martin and Dakota Johnson's split
Rosanna Davison brings her twin boys home to meet their big sister
You may also like
1 month ago
3 things I've done to make my Instagram feed better for my head
2 months ago
Sir David Attenborough has officially joined Instagram and we couldn't be happier
6 months ago
Dogs Working From Home is the Instagram account that you need to follow during lockdown
6 months ago
'I'm not posting continuous pictures of my face' Niamh Webb O'Rourke on the evolution of blogging
7 months ago
Living with synesthesia: The Irish artist who experiences colour in an entirely different way
7 months ago
Check out the €20 New Look bargain that's just too good to miss out on
Next Page