It's time to stock up.

Jeffree Star has confirmed the news that two of his trademark palettes will be discontinued this year.

After much speculation from fans that the loved Alien palette could be facing its final days, Jeffree took to social media to put an end to the speculation and explain exactly what's going down.

"Yes the rumors are true" the makeup guru opened with before explaining what was leaving our shelves in 2020.

Good morning everyone... Yes the rumors are true ?#JeffreeStarCosmetics is discontinuing the Thirsty & Alien eyeshadow palettes! Time to make room for all the new shit dropping in 2020!

Thirsty is the other palette Jeffree has chosen to cancel making. Both the Thirsty and Alien palettes were released in 2018 and featured vegan and cruelty-free eyeshadows which are known for their extra shades and strong pigment - a Jeffree Star trademark. 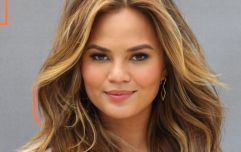 Chrissy Teigen has been praised for her tweet about period skin

END_OF_DOCUMENT_TOKEN_TO_BE_REPLACED

But as the star continues to grow his empire, having his biggest sell this year to date for his Conspiracy Collection with YouTuber, Shane Dawson, the star feels it's the right time to make some space.

But when you've got a fanbase like Jeffree, it's not an easy blow to see cosmetics leave the shelves and Twitter is understandably devastated.

The Alien Palette was in the top 5 for best JSC eyeshadow palettes. It was the only thing I was looking forward to as I was going to order it for my birthday whenever it got restocked. 2020 sucks already and everything is dead. pic.twitter.com/qiI9KPW8vW

Is this a thing you’re gonna be doing? Removing items for other items? Just so that I know to spend my travelling money on products instead of travelling lmao

"The hardest part has been waking up and he's not laying next to me anymore.. But I'm a tough bitch and 2020 is going to be my year," Jeffree wrote on Twitter before sharing a "We Broke Up" video to explain all.

Star admits that there was a lot of reasons for their breakup between busy careers, not taking time to process their dog's death and Nate's wish to be less in the spotlight.

You can watch the video here.

popular
Davide Sanclimenti opens up on having kids with Ekin-Su Cülcüloğlu as he turns down Dancing On Ice
Primark reintroduces female-only fitting rooms after two men walk in on woman
8-year-old Ukrainian girl stabbed in Clare 'out of danger'
Anna Delvey is set to be released from prison
Man and woman charged with murder of four year old boy in 2021
Hilary Swank, 48, reveals she is pregnant, expecting twins
So apparently George and Mollie from Love Island aren't actually step siblings
You may also like
4 days ago
Activist who rejected Oscar on behalf of Godfather star Marlon Brando dies aged 75
1 week ago
WATCH: First look at Netflix's YOU season 4
1 week ago
A Criminal Minds re-boot is happening – and here's everything we know
2 weeks ago
Rylan Clark was hospitalised with two heart failures after marriage breakdown
2 weeks ago
WATCH: The trailer for Mila Kunis' new Netflix movie is here
3 weeks ago
A docuseries about the 'Bling Ring' is coming to Netflix
Next Page