People are sticking glitter Christmas puddings on their boobs and yeah, fair enough

Putting glitter on random parts of your new body is not a new thing.

It's been done. Done a lot. Done to death, in fact. Done so much that we'd actually just rather if people wore actual pieces of clothing instead of pieces of shiny plastic but whatever, we're not here to judge anybody's life choices.

The latest glitter craze, however, is a little bit special.

Because it involves glitter Christmas puddings on boobs and nothing else and yeah, we'd be lying if we said we weren't at least a little bit into it. 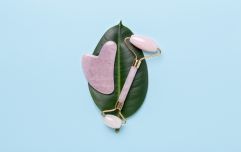 The Her Christmas gift guide for beauty lovers

END_OF_DOCUMENT_TOKEN_TO_BE_REPLACED

For the past few months, they've been sticking glitter on absolutely every body part possible, creating looks that are equal parts stunning and uncomfortable, but sure look, it's Christmas.

Go Get Glitter have called their creation #PUDDINGBOOBS, which is fair and to the point so yeah, into it.

And in true festive season fashion, people have been taking it upon themselves to tag their mates on the photo and ask whether they're going to sport a similar look for their Christmas parties this year.

Not a bad idea, in fairness.

popular
Airport outfits are all the rage as we head abroad - here are the 4 best ones
Gemma Owen gets to know Jack Keating as her head turns on tonight's Love Island
Penneys has a perfect dupe for Charlotte Tilbury's Flawless Filter foundation
So it seems Ekin-Su once competed as Miss Ireland before Love Island fame
A 'hangover pill' has just gone on sale in the UK - and they ship to Ireland
WATCH: The moment dad attacks 3-year-old son's suspected murderer in court
Love Island's Gemma finally tells villa about dad Michael Owen on TV
You may also like
1 month ago
The Late Late Toy Show is being made into a musical
6 months ago
Text your ex over Christmas, yeah?
6 months ago
According to tradition, your Christmas tree should stay put for a while longer
6 months ago
Childline received over 1,000 calls from "anxious" children over Christmas
6 months ago
3 scnted candle hacks to make your home smell even more gorgeous this Christmas
6 months ago
Cheers! 3 delicious ways to pimp your Prosecco for New Year's Eve
Next Page