She warned fans not to do it.

Taylor Swift has admitted she used to use permanent marker as eyeliner. 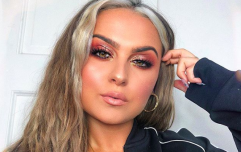 END_OF_DOCUMENT_TOKEN_TO_BE_REPLACED

While her winged eyeliner seems impossibly perfect now, the pop star confessed that she used to "occasionally" draw it on with a Sharpie years ago.

The 29-year-old made the odd admission during an interview with Elle for their April issue, where she shared the 30 things she learned before turning 30.

"After my teen years and early twenties of sleeping in my makeup and occasionally using a Sharpie as eyeliner (DO NOT DO IT), I felt like I needed to start being nicer to my skin.

"I now moisturize my face every night and put on body lotion after I shower, not just in the winter, but all year round, because, why can’t I be soft during all the seasons?!"

The Look What You Made Me Do singer also reflected on her least favourite beauty look from over the years - that time she bleached her hair right before she played Coachella a few years back.

"Fashion is all about playful experimentation. If you don’t look back at pictures of some of your old looks and cringe, you’re doing it wrong. See: Bleachella."

Elsewhere in the interview, Swift stressed the importance of "learning the difference between lifelong friendships and situationships."

"Something about 'we’re in our young twenties!' hurls people together into groups that can feel like your chosen family.

"And maybe they will be for the rest of your life. Or maybe they’ll just be your comrades for an important phase, but not forever.

"It’s sad but sometimes when you grow, you outgrow relationships. You may leave behind friendships along the way, but you’ll always keep the memories."

popular
Teen who pushed girl “head first” under Dart to face trial in adult court
Taxi driver who dropped missing woman Bernadette Connolly off comes forward
Decision to charge or release murder suspect in Ashling Murphy case will be made today
Sinéad O'Connor shares emotional new song dedicated to late son Shane
Man arrested on suspicion of murder of Ashling Murphy
Fans convinced Love Island's Chloe inspired new Kanye track
Tributes pour in for Vogue icon Andre Leon Talley, who has passed away
You may also like
3 weeks ago
The pop culture moments that defined 2021
2 months ago
Three months is plenty of time to fall in love, and to have your heart broken
2 months ago
5 things you may have missed from Taylor Swift's All Too Well short film
3 months ago
Taylor Swift's re-recorded Red album is coming earlier than we expected
4 months ago
Taylor Swift is apparently in Ireland right now
5 months ago
Fans are convinced Taylor Swift is in Donegal
Next Page