The Aisling books are back and in this novel, she's off to NYC

The Aisling series of books have taken over our lives, and it won't be long before we get the next instalment of this much loved series.

After the highly successful "Oh My God, What a Complete" Aisling by Emer McLysaght & Sarah Breen, and its two sequels "The Importance of Being Aisling" and "Once, Twice, Three Times an Aisling", a fourth is on the way.

END_OF_DOCUMENT_TOKEN_TO_BE_REPLACED

Taking to Instagram to reveal the news, book publisher Gill Books said the fourth book of the series is making its way to the shelves on October 8th.

They wrote: "We could not be more excited to announce that Aisling is back - and she’s off to New York!

END_OF_DOCUMENT_TOKEN_TO_BE_REPLACED

"Emer McLysaght and Sarah Breen have revealed that the fourth (and penultimate) book in the much-loved Aisling series, ‘Aisling and the City: If she can make it there, she’ll make it anywhere’, will be published on 8 October this year.

"As the authors announced the publication date and revealed the book’s cover they said, ‘After a year of spending so much time at home we were very excited to escape to New York with Aisling and lose ourselves in her world. We hope Aisling fans everywhere will find comfort and joy in its pages when they read it too.’"

The novel is set in a Covid-free universe, but the themes Aisling faces this time around are set to resonate with us despite this. 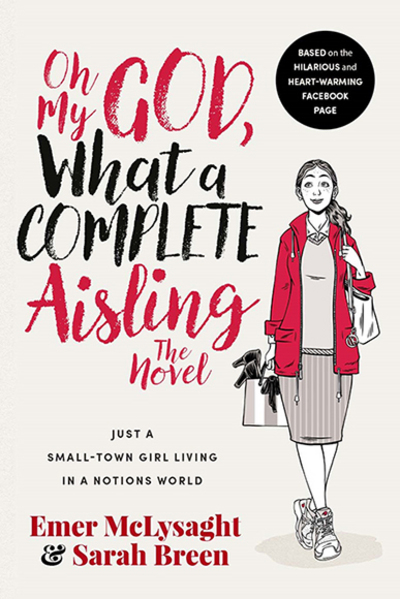 END_OF_DOCUMENT_TOKEN_TO_BE_REPLACED

They added: "The themes many of us have been grappling with this year are weaved into the storyline as Aisling faces the challenge of loneliness and is reminded of the importance of community in times of crisis, prompting her to reflect on what matters in life.

"With her café BallyGoBrunch flying and the door firmly closed on her relationship with John, an unexpected job offer sees Aisling boarding a business-class flight to New York in her best wrap dress and heels.

"As she finds her feet in the Big Apple, she throws herself into the dating game, grapples with ‘always-on’ work culture, forges and fights for new friendships, and brings her good wedges to a party in the Hamptons (much to Sadhbh’s dismay)."

popular
Irish girls name was the most used Irish name in the United States last year
Viewers call out Love Island girls after they exclude Danica and Indiyah
Ofcom receives 75 complaints over Jacques' treatment of Ekin-Su
Love Island: Danica sets her sights on Andrew as Luca asks Jacques about his relationship with Gemma
Love Island fans in stitches after spotting two Damis in one scene
Prince William shouts at photographer who was "stalking" his family
Michelle Heaton shares candid shots to celebrate milestone in sobriety journey
You may also like
3 years ago
Unreal! There's going to be three more books in the Oh My God, What A Complete Aisling series
3 years ago
There's a very decent lineup on the Late Late Show this week
4 years ago
It's confirmed - Oh My God, What a Complete Aisling is being turned into a movie
4 years ago
Oh My God, What A Complete Aisling gets picked up by major worldwide publisher
4 years ago
Looks like Oh My God, What a Complete Aisling is becoming a movie
1 year ago
Dolly Alderton's Everything I Know About Love is coming to TV
Next Page