We all know that most people who use smartphones are, a lot of the time, addicted to their devices.

Those of us who are frequent checkers probably don't want to know how often they feel the need for notifications/validation, but we've found out anyway.

Business Insider reports that an analyst Ben Bajarin attended a security meeting at Apple HQ last week where the unlocking statistic for iPhones was revealed. 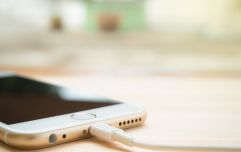 END_OF_DOCUMENT_TOKEN_TO_BE_REPLACED

80 times a day, so at 12-hours a day of usage on average that comes down to about once every ten minutes.

And we know there are some of you out there who do it more often (ahem).

Apple shared the stats because it wanted to illustrate that using fingerprint ID is much more efficient than inputting a PIN every time you unlock your device, which is a fair point.

*Picks up phone, puts it down again. Picks it up again. Forever*

popular
Shawn Mendes (24) is reportedly dating Dr Jocelyne Miranda (50)
Brighten up your Christmas with these affordable festive lights, coming to Lidl next week
3 simple tips to get your nails in shape ahead of Christmas
Irish wellness brand cancel Cork pop-up following explosion on ship full of stock
Apparently this is the best date to put up your Christmas tree
David Walliams has reportedly quit Britain's Got Talent following offensive comments
Love Island: Davide "not surprised" by Gemma and Luca's split
You may also like
10 months ago
Model issues warning after being tracked with device and followed home
1 year ago
WhatsApp to stop working on over 50 phone models today
1 year ago
Apple to unveil 217 new emojis, including gender neutral faces
1 year ago
The new iOS 14.5 update will let you unlock your iPhone with a mask on
2 years ago
Apple forced to pay $100 million after admitting they slowed down old iPhones
3 years ago
Here's how to stop your phone from always saying 'duck' and 'ducking'
Next Page