Jewellery designer Chupi Sweetman on Topshop, her brand, and taking out the bins

Chupi Sweetman says that she was the kid covered in glitter and glue, making crazy creations out of papier mâché. Her love of making beautiful sparkly jewellery has earned her multi-award winning Chupi brand fans around the globe.

Chupi's delicate gold jewellery is inspired by the beauty of all things natural and wild, and is stocked in leading stores across the UK and Ireland. This week on The Capital B, the 33-year-old designer talks lollipops, being the youngest ever designer to work for Topshop, building a design empire, and taking out the office bins...

"I wasn't actually named after a lollipop but hippy parents are always dangerous. My name comes from South America - mum and dad worked in Guatemala, Peru, and Honduras. They spoke Spanish the whole time so when they came home to have babies they didn't look to their more prosaic Lincolnshire and Wicklow roots for a name. Chupi means 'little one'. I was meant to be called Chloe! When I was about 16 my dad sat me down and said 'darling we need to talk about your career... something nice and sensible like economics.' I said dad you named me Chupi you know you're fighting a losing battle."

"I was home-schooled. Not for any crazy religious reasons I hasten to point out - I do believe in evolution! But it meant I was always really busy. So when I was 17 I started a little women's wear label and had a pop-up stall in Cow's Lane fashion market every Saturday. One day Topshop were scouting Ireland for designers and they scouted me. I did the interviews, went through the whole process, so at 21 I got to quit college and make beautiful dresses.

Topshop was amazing and terrifying. We had three week contracts so if you didn't meet your sales targets for the three weeks you were out. The targets were pretty insane. I was 21, 22, 23 and designing for people my age. I was my target audience but that was why it worked. It was a real baptism by fire - I learned about business backwards in a way."

"We market our collection in lots of different ways, some old-fashioned, some new. We show at London Fashion Week, we do trade shows, we knock on doors, we do a lot of influencer marketing. We've scaled up slowly to a team of 22 people. Once, I was standing at London Fashion Week speaking to an editor of Vogue - we were talking about how amazing the collection was when my phone pops with a reminder to take out the studio bins... I thought yep that's my real life right there. I think that's really important - we're a tiny team - scale up but don't forget your place. If there's a kitchen bin rota, I'm on it." 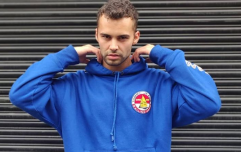 END_OF_DOCUMENT_TOKEN_TO_BE_REPLACED

Episode 8 of Ireland's biggest business podcast, The Capital B is here! The Capital B is available every Monday morning from 7am; listeners can tune in on Soundcloud and can also download and subscribe to the podcast on iTunes and other podcast providers.

popular
COVID-19 hospital cases fall as 90% of Irish adults are now fully vaccinated
Miracle baby on the way for bride whose partner died on wedding day
Tributes pour in for 28-year-old primary school teacher killed in London
Cork school gets Ireland's first classroom therapy dog to help ease pupils' anxiety
Paul Mescal is officially nominated as one of the sexiest men alive
WATCH: Dublin Zoo's Wild Lights makes its highly anticipated return
Amy de Bhrún welcomes her second baby
You may also like
2 days ago
Holly Willoughby launches new lifestyle brand, Wylde Moon
4 days ago
Penneys has launched a major sustainability pledge – and here is what is changing in store
5 days ago
A sustainable fashion flea market is taking place in Dublin tomorrow
6 days ago
Billie Eilish's second Met Gala dress is beyond stunning
1 week ago
Kim Kardashian on the reason behind *that* Met Gala look
1 week ago
The best Twitter reactions to Kim Kardashian's outfit at the Met Gala
Next Page