#MakeAFuss: Nikki Whelan on mixing business and family in the social media age

How do you turn a business you started in your kitchen into a success? 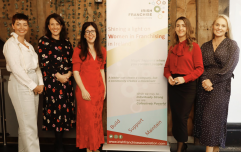 END_OF_DOCUMENT_TOKEN_TO_BE_REPLACED

The company she started as a new mum wanting to dress up her newborn daughter has amassed 45,000 followers across Facebook and Instagram and has cornered the Irish market in hair accessories for little girls.

"To this day I still can’t believe where it’s gone in such a short space of time, it’s pretty incredible," she tells us.

END_OF_DOCUMENT_TOKEN_TO_BE_REPLACED

It all began less than three years ago, shortly after Nikki had given birth to her second child and first daughter, who she and husband Gavin named Pippa.

Nikki says she was obsessed with all things pink and girly but struggled to find a bow that would sit on her baby's head properly.

"It would fall off her head or else they were leaving marks so Gav used to say 'get that bow off'."

Determined for Pippa to have "something adorable to wear on her head," Nikki took to the sewing machine at home with some old fabric.

END_OF_DOCUMENT_TOKEN_TO_BE_REPLACED

"I have a crafty hand because my mum was a dressmaker so I learned the tricks of the trade from her.

"I started to make my own little bows and that was fine. I had no intention of doing anything else with it but people started passing remarks, so it got to the stage where we were like 'there’s something there' so we ordered in some fabrics and I started to make a few."

The bows, modelled by little Pippa, started to draw attention and gained the business a following online.

They decided to exhibit at the pregnancy and baby fair in Dublin's RDS and everything "snowballed."

Little Bow Pip is now available in Mothercare and Tony Kealy stores around Ireland. The company has a distributor in Dubai and there is interest from as far afield as the US and Australia.

Though she originally made each headbands herself with the help of her mum, Nikki decided to take on a few extra hands to help out.

These days, she has a team of four making the bows here in Ireland, plus staff members who look after packing, orders and sales. Gavin is also on board as general manager, helping to drive the business.

"It’s absolutely not all flowers and butterflies."

Family has played a huge role in the success of Little Bow Pip, Nikki explains.

"Everybody's involved in it in some shape or form, whether it’s looking for ideas, minding the kids.

"Neither of the businesses (Nikki also runs Back Street Dance Studios in Swords) would be able to run without our families, that’s just how it is."

Her family also features heavily on Little Bow Pip's social media - followers can keep up with Nikki, her kids and extended family as well as the business's journey.

This has no doubt helped to grow the brand's following but sharing her personal life online isn't something that Nikki does lightly.

"I wanted to just be real and true to myself," she says.

"It’s absolutely not all flowers and butterflies. Yes, you can have a nice house and a nice car – (but) it’s not all like that. We have been through some really difficult times, especially in the last two years.

"(Followers) see ten-second clips throughout the day, they don’t see the hard times when I may not feel like picking up my phone or my kids may not want to be videoed. I share as much as I feel is OK to share."

That doesn't mean she and her family have been immune to cruel comments from strangers.

"I only received one the other day from some lady passing remark about (our son) Jayden saying that I pretty much neglected him and that I was all about Pippa (on our social media), which is just bullsh*t," Nikki reveals.

"Jayden is ten years of age and he’ll say 'Mam, don’t record me' or 'Don’t take a photo of me' because he’s at that I age and I don’t, I respect that. But I don’t have to explain myself."

Her brother David's partner is Terrie McEvoy, an Irish influencer with a massive following who has been no stranger to controversy in the current climate of blogger call-outs.

Nikki has seen just how negative an effect online comments can have.

"My brother and Terrie are very much in the public eye as well and it’s really worrying how far some people can go.

"I think there’s going to be a case where they push somebody too far and that’s when sh*t will really hit the fan.

"I think people should just be a little bit wise about their words and have a broader mind and know that it’s not all just what you see and what you read."

"Go full steam ahead and be prepared for the ups and the downs."

Social media also means that quite a lot of people have followed Nikki's story and look up to her as a woman in business.

She says she's proud of all she's achieved but always tells anyone setting out on their own to be ready to graft.

"I do have a lot of people that ask for advice... and if they catch me on the wrong day I do think to myself, I’d love to say to them 'Don’t do it'," she admits.

"You do have some very difficult times but you also have some huge pros and positives.

"I do say to people 'Go for it, if you have an idea that you feel so passionate about' but they have to put everything into it and nothing comes easy.

"So if you’re going to do something, find your own concept, make your plan, go full steam ahead and be prepared for the ups and the downs."

So what's next for Little Bow Pip?

Nikki is tight-lipped but says that customers can expect "exciting" new products in the next year. The company has also been approached about running a number of pop-up shops in the coming months.

This success has been hard-won but Nikki is still bowled over by how far the business has come.

"It’s insane, I can’t even believe I’m saying it."

popular
Molly-Mae Hague fans think they officially know her baby's name – and it means cloud
Baby found unattended in pram in Dublin, Gardaí reveal
Joanna Cooper heartbroken after her mum is diagnosed with dementia
"I feel like I lost myself": Nathalie Lennon on her mental health struggles and her latest project with Pieta
Tasha Ghouri hits back at another islander who called her relationship fake
Conor Mcgregor hit by car ‘at full speed’ while cycling
Gwen Stefani reportedly pregnant with baby number four
You may also like
11 months ago
These Irish hotels are offering free professional headshots to women in business
1 year ago
"I am a sleep enthusiast!" Meet Hannah Murphy – the woman behind ethical Irish bedding company Amurelle
1 year ago
The Westbury Hotel in Dublin is offering complimentary headshots for women in business
3 years ago
Here are all of the finalists for this year’s Women In Tech Awards
3 years ago
Nominations for this year's Women in Tech Awards are now open
3 years ago
Hear how our Girls With Goals producer Niamh Maher nabbed her current role in media
Next Page