She insists it was by text.

We were shocked to find out that Amber Gill and Greg O'Shea ended their relationship last Friday. It came just before she was meant to appear on The Late Late Show with him and Maura Higgins that night.

Greg confirmed on the show that they ended things but Amber has had little to say about it - until now.

There was a lot of speculation going around about Greg dumping her by text and Amber confirmed the rumours today.

The reality star appeared on Loose Women this morning and spoke about how it all happened.

“From my point of view I still wanted to make it work,” she said. 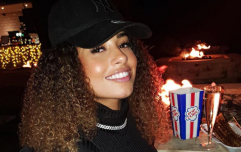 END_OF_DOCUMENT_TOKEN_TO_BE_REPLACED

“There was a call a few days prior just chatting- not specifically to do with that. But definitely on that day it was like a text.”

“We were texting each other, but that’s why I had to cancel.”

popular
Two women survive 15 hours in the water in Galway Bay
Set up the WhatsApp group! There's a new 'Rosé inspired' afternoon tea in town
This no bake 'Chocolate Refrigerator Cake' recipe has us drooling
How to cope in this humidity: From sleeping better to dealing with frizzy hair!
Irish influencer Lisa Jordan reveals her little boy's name and it's so cute
Want a snatched nose? These contouring hacks are making waves online and they're pretty simple!
Power ponytails and perfect messy buns! Here's some TikTok hair hacks to try at home
You may also like
9 months ago
Amber Gill posts cryptic tweet after her exes are spotted hanging out together
10 months ago
Greg O'Shea has revealed what he did with the money he won on Love Island
10 months ago
Love Island's Greg says Amber 'can say whatever she wants' about their breakup
11 months ago
Amber Gill defends Anna Vakili in first social media posts since breakup with Greg O'Shea
11 months ago
Love Island's Amber Gill and Greg O'Shea have reportedly broken up
11 months ago
Love Island's Maura Higgins has reportedly signed up for Dancing on Ice
Next Page