Amy Huberman and Brian O'Driscoll have welcomed their third baby into the world, and it's a baby brother for big sister Sadie and big brother Billy.

It was the proud new father who announced the news on his Instagram account earlier today, even sharing the name they picked for baby #3: 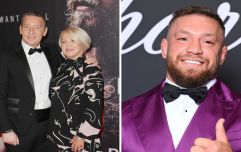 END_OF_DOCUMENT_TOKEN_TO_BE_REPLACED

Sharing an image of himself carrying his newborn into their home, Brian wrote:

"2020 was a bit crap but the end of it was aiiiiight! Ted O’Driscoll arrived on Dec 28th and he is deadly. His mum is a champion and his brother and sister are thrilled at having a new little bro."

Huberman has yet to announce the latest arrival on her own social media, however, the actress shared the news of her pregnancy back in September with this hilarious post:

popular
Celine Dion, 54, diagnosed with incurable neurological disease
HSE advises children with sore throat, cough and fever should stay at home
Fans are feeling seriously sorry for Molly Mae Hague after resurfaced interview
He may be a politician, but Leo Varadkar's personal life is none of our business
Maura Higgins claims she was left by designer who went to style someone else at an award show
Here are our top picks from this week's Lidl Toy Event
Joanne McNally discusses her experience with bulimia
You may also like
3 days ago
Should pit bulls be banned in Ireland? Parents express concerns after recent attacks
1 week ago
Warning to Irish public over major rise in burglaries
1 week ago
Fundraiser set up for boy attacked by pit bull in Wexford
4 weeks ago
Teenage girl killed in car accident in Letterkenny
1 month ago
Woman arrested following fatal stabbing in Ballyfermot
1 month ago
Woman dies in hospital following Dublin house fire
Next Page