Yesterday, the news broke that Amy Schumer and husband Chris Fisher are expecting their first child.

Amy shared the news through her friend Jessica Yellin’s Instagram while also sharing a political message.

Posting a note of her voting recommendations for the upcoming midterm elections in the US, Amy buried the exciting news right at the end, simply saying:

Ahead of breaking the news, Amy posted a photo of Prince Harry and Meghan Markle by swapping the heads so it looks like her and Chris, teasing the news that was to come.

And that's not the only time Amy has mentioned the Duchess of Sussex. As the pair are both pregnant, Amy is compairing her pregnancy to Duchess Meghan's in her typical funny-girl way and we're loving it.

Sharing an image of herself in the bathroom suffering from morning sickness, she wrote:

"Today Markle is in Figi #same." 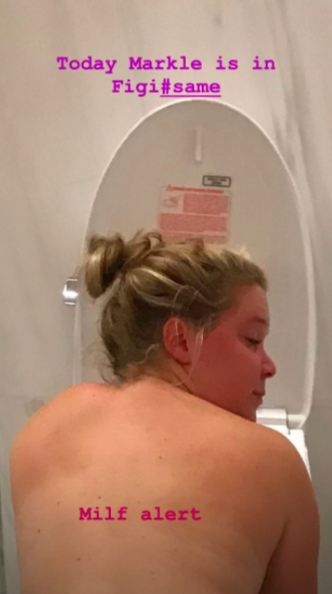 The 37-year-old has always been known for her hilarious and often, sometimes controversial comparisons like in I Feel Pretty, a movie which divied opinion on whether it was actually empowering woman or leading them to believe that confidence only comes from being thin and successful?

That aside, we must admit we're loving her humorous take on pregnancy and we cannot wait to see what's in store next.

popular
Taoiseach Micheál Martin asks public for 3 things, confirms some restrictions staying
Man arrested after woman raped on train as passengers filmed it
Jamie Redknapp marries girlfriend without ever announcing engagement
Giovanni serenades Strictly partner Rose after Maura split
Nightclubs will return with proof of vaccination under Government's new reopening plan
Family of four found dead in hotel sauna
Will the clubs be reopening on October 22? Here's what we know so far
You may also like
1 day ago
Squid Game creator on possible storylines for second season
4 days ago
Another Strictly star has pulled out of the live show
1 week ago
Squid Game fans spot massive clue in Tug of War game
1 week ago
Give Midnight Mass another shot - please
1 week ago
Disappointment as The Den has been cancelled again
2 weeks ago
Why we can't stop watching Squid Game
Next Page