It was only last night that we saw Jordan ask Anna to be his girlfriend.

However, at the end of last night's episode it was revealed that Anna and Jordan were one of the least popular couples on the series.

Obviously, the Islanders know they're super strong together so voted to keep them on the show.

Tonight, the public's decision seems to take its toll on Anna and she vents her frustrations to her new boyfriend. 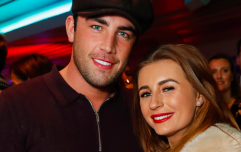 END_OF_DOCUMENT_TOKEN_TO_BE_REPLACED

Speaking with Jordan in the lounge, Anna says: “This is the third time. How are we in the bottom three when we are the second strongest couple?” to which Jordan replies, “I don’t actually know.”

Jordan wants to reassure Anna that they're really together and will work no matter what. He says to her: “Don’t worry yourself about what other people think. What is the point in letting it get us down? When we get out of here, we’re going to have fun!”

Later, speaking in the Beach Hut, Jordan says: “Of course, being in the bottom three isn’t nice. It does upset me but I’m not going to let it get me down. I’ve been saved by the Islanders, which is unreal! The majority of people in here love us and that means a lot to me and I know it means a lot to Anna.”


popular
Say hello to the €19 Penneys skirt that will go with everything in your wardrobe
Meet the cleanser that reduced pore size for 91 percent of women (in just three weeks!!!)
The one food that the Royal Family are forbidden from eating
Sorry, can we talk about Kate Middleton's €10 leopard-print skirt for a minute?!
Say hello to the €20 New Look skirt that will go with everything in your wardrobe
Met Éireann state that three days of snow, hail, and sleet is coming for parts of Ireland
Introducing the €45 ASOS skirt you're going to see everywhere on Instagram next season
You may also like
20 hours ago
'A proud dad' Love Island's Jack Fincham has become a father
21 hours ago
Love Island fans are all saying the same thing about Siânnise after last night's episode
1 day ago
One boy dumped from the villa tonight as Rebecca makes a difficult decision
1 day ago
It looks like one couple could be heading for Splitsville on tonight's Love Island
1 day ago
Two new boys in the villa... but all anyone can talk about is these two Islanders
2 days ago
Love Island's Connagh tells Siannise he's just not that into her tonight
Next Page