Apparently, this is the real reason why Love Island's Charlie and Ellie broke up

On Wednesday, Charlie Brake announced his split from his co-star girlfriend, Ellie Brown.

The 23-year-old multi-millionaire confirmed the news of their split in a post on his Instagram Stories writing: 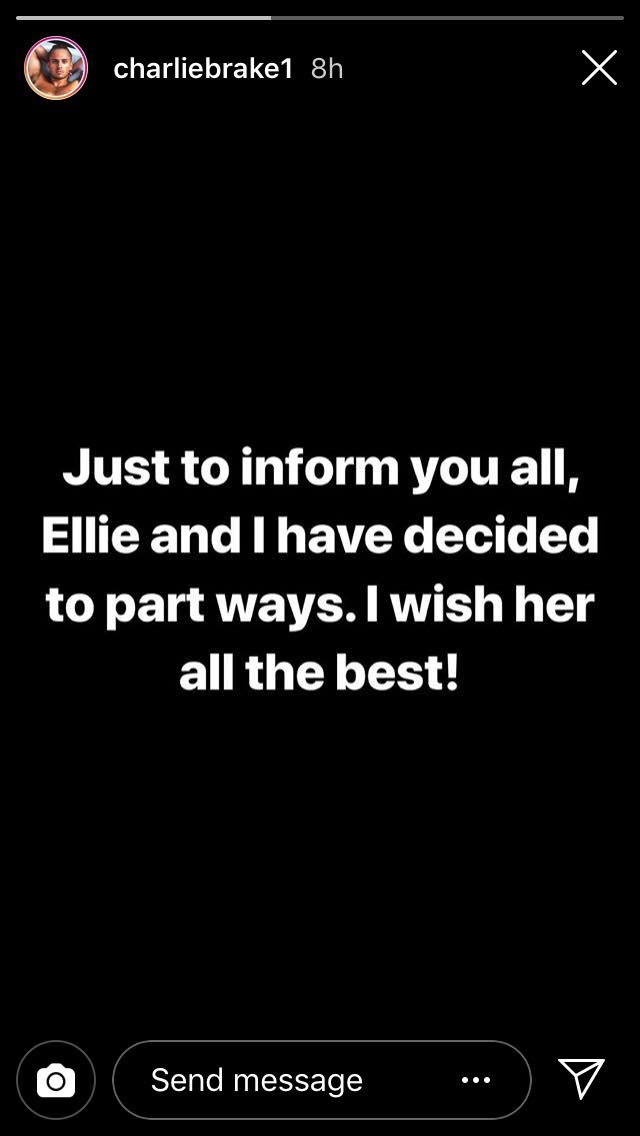 This news came as a shock to fans, as the pair appeared to be going from strength to strength, having just returned from a romantic break in Gsstad and sharing endless images looking more loved up than ever.

However, all is not as it seems - five days after returning home the pair had called it a day on their relationship.

And now, apparently, the reason for the abrupt breakup was due to Charlie cheating on Ellie during their relationship.

According to The Sun, Charlie was pretending to be at his mum's house in Kent when he was actually out on a date with another woman. Ellie then caught him out when fans posted images of the star in Zuma, London with the mystery woman.

A source spoke to the publication saying the following:

"Charlie told Ellie he was going to spend Monday night at his mum’s house in Kent which was fine.

“But she woke up Tuesday to several messages from fans who’d seen Charlie at Zuma in Knightsbridge having a romantic dinner with another woman.

“She was told Charlie looked panicked and uncomfortable when he was approached for photos. The expectation was to see him with Ellie – not this other blonde."

“Ellie asked Charlie where he was on Monday night and he claimed he did come back to London but went to Nandos.

“That led to them having a massive row as Ellie knew he was lying and had photographic evidence to prove it.

“In the heat of the moment Charlie ended it but then rushed to Instagram to tell everyone, and that really upset Ellie. She felt incredibly hurt and disrespected."

popular
Dublin Airport in "shambles" after weekend of chaos
3 simple but effective ways to prep your skin for the summer
Opinion: Why is everyone obsessed with Alexa Demie's age?
Why Are Men so Obsessed With Boobs? The Answer is Pretty Surprising...
Coleen Rooney shares "suspicious" DM she received from Rebekah Vardy before Wagatha Christie
Doctor Strange actress Zara Phythian receives 8 years for child sexual abuse
The Greatest Showman is becoming a Broadway musical and we need a second
You may also like
1 day ago
Gardaí appeal for witnesses following serious assault on man in Tallaght
1 day ago
A couple in India has sued their son for over €600,000 for not giving them a grandchild
1 week ago
Parents of man who died after eating takeaway pizza demand "full truth"
1 week ago
Man in 80s dies while swimming at Killiney beach
1 week ago
Andrew McGinley meets with HSE for inquest into wife's care
1 week ago
Ireland ranked one of the worst countries in Europe for paid maternity leave
Next Page