Ariana Grande isn't all that impressed with her new waxwork and yeah, absolutely fair

Looks like she'll be saying 'thank u, next' to this piece, wha?!

Waxworks are generally a bit of a dodge scenario.

As a rule, they're don't really look like the person they're supposed to look like, are a bit scary, and generally just bizarre. 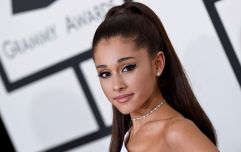 END_OF_DOCUMENT_TOKEN_TO_BE_REPLACED

If a single human being in this world has ever witnessed a waxwork of themselves and said: 'wow, this really looks like me', then we have yet to meet them.

They do not exist. It's not a thing.

One person who recently witnessed a waxwork of themselves and wasn't entirely impressed was Ariana Grande.

END_OF_DOCUMENT_TOKEN_TO_BE_REPLACED

The image was shared to Popcravenews's Instagram account and shows the singer standing in her iconic oversized jumper, thigh-high boots, and high ponytail.

Positioned in front of a load of pink loveheart sweets that read: 'eat,' 'yolo,' and 'boss lady,' the waxwork resembles somebody who vaguely looks like Ariana dressed up as Ariana rather than actual Ariana herself.

Her fans seemed to think so too as they took it upon themselves to comment that Madame Tussauds "did her so wrong," "doesn't even look like Ariana omg," and that "someone should melt that shit down."

Drastic but OK yeah, here for it.

This comes after a painful Daenerys Targaryen waxwork was unveiled in Dublin last month.

A post shared by The National Wax Museum Plus (@waxmuseumplus)

The creation, which looks even less like Emilia Clarke than the above does of Ariana, was met with much ridicule as fans of Game of Thrones asked how in the name of God such a waxwork could be showcased as a legit piece of work.

No shade on whoever made it, but like, they clearly haven't seen the show before.

It could always be worse, Ari.

popular
Woman spots dead husband in promo video for Indian restaurant
Redhead girl stabbed with scissors at school 'because of colour of her hair'
Where to watch 2023's ten Best Picture Oscar nominees
"I feel like I lost myself": Nathalie Lennon on her mental health struggles and her latest project with Pieta
Gwen Stefani reportedly pregnant with baby number four
Anne Hathaway shares disappointing news about The Princess Diaries 3
Molly-Mae Hague fans think they officially know her baby's name – and it means cloud
You may also like
4 months ago
Wicked the Movie(s): Everything we know so far
9 months ago
Wicked movie to be split into two different films
1 year ago
Petition to keep James Corden from starring in new Wicked film hits 25,000 signatures
1 year ago
Ariana Grande and Cynthia Erivo cast in Wicked movie
1 year ago
Ariana Grande just confirmed her beauty range is coming next month
1 year ago
Ariana Grande granted restraining order against stalker who allegedly threatened to kill her
Next Page