Ashley Cain has said that he took baby daughter Azaylia to hospital last night for an emergency blood transfusion that could give her a few extra days to live.

Baby Azaylia Diamond, who is just eight months old, is currently battling a rare form of leukaemia. Parents Ashley and Safiyya had planned to move to Singapore to avail of life saving treatment, but have since returned to the UK to "make our baby as comfortable as possible," following the discovery of more aggressive tumours.

Taking to Instagram Stories last night, Ashley told followers that his daughter was taken to hospital for a transfusion when she started bleeding from her nose. He added that the treatment could give her a few more days to live.

"We rushed Azaylia in tonight on oxygen because she'd been bleeding out from the nose," he said.

"Because of her blood cancer it means it eats away at the cells that help to clot the blood. So with the tumours, plus the lack of platelets in her body, that means she could bleed out from the inside and that's no way for Azaylia to go.

"If that can preserve us for one day, two days, three days, every day's a blessing. Let's go, champ."

Ashley urged any parents experiencing something similar to make sure that they "know [their] stuff." 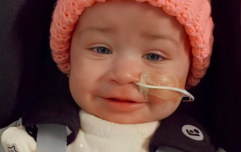 END_OF_DOCUMENT_TOKEN_TO_BE_REPLACED

"By taking pride in your child's care and not leaving it to anybody else you know certain things that can preserve your child's life or even give them an extra day or two days on this planet," he said. "Because every moment is precious and I want every parent going through this to understand that."

Reality TV star Ashley first shared the news of his daughter's leukaemia back in October, revealing she had a "rare and aggressive form of cancer."

The family had planned to move to Singapore for CAR T-cell therapy, which is no longer feasible given the discovery of their daughter's tumours.

Girls With Goals || Her · Ep.161: Feeling Peachy - Sharon Keegan of Peachylean on being an absolute BOSS!
popular
The fashion world is OBSESSED with potato brown right now – and for good reason
QUIZ: Can you beat Ross's quiz in Friends?
Woman buys 148 year old house, goes viral after finding secret passage way
Big Brother star left temporarily blinded and scarred after TikTok DIY beauty 'hack'
More footage of Tristan Thompson cheating on Khloe has emerged
Kate Middleton has addressed the rumours that she's pregnant with her fourth child
9 Dublin restaurants with outdoor dining we've already booked a table for
You may also like
2 days ago
Family of 9-year-old killed by lightning donate his organs to save three other kids
2 days ago
Fantastic Beasts star Kevin Guthrie jailed for three years following sexual assault
3 days ago
Man and woman die in house fire in Co Roscommon
5 days ago
11-year-old schoolgirl dies following road traffic collision in Co Kerry
6 days ago
Seven dead following shooting at birthday party in US
1 week ago
15-year-old boy charged with murder of woman in Dublin
Next Page