Baz Ashmawy has announced the birth of his first grandchild.

The 45 year old DIY SOS presenter took to Instagram today to share the happy news and post a really quite sweet photo of his newest family addition.

END_OF_DOCUMENT_TOKEN_TO_BE_REPLACED

He also called himself a "GILF," which is fair enough.

"So, our little girl had a little girl," he said. "Congratulations Charlotte and Brian. So proud of you both. You're going to be great parents. Trust me.

"You've made us all so happy at a time when things are so tough. I could burst. I can't wait to squeeze you All but especially the new little lady in my life. On a side note... For a man that's done it all I'm going home to get some granny action tonight! First time for everything!"

Baz is stepfather to his fiancée's Tanja's four children, Charlotte, Harry, Jake and Amelia. The couple also have two children together, Hannah and Mahy. It was Charlotte who welcomed her first child this week, alongside partner Brian.

Presenter Baz met Tanja in Copper Face Jacks in 2006. The pair have been engaged for five years, with Baz recently saying that there probably won't be wedding bells any time soon.

END_OF_DOCUMENT_TOKEN_TO_BE_REPLACED

"You’ve been talking to my eight-year-old obviously, they’re all pushing for that," he told Evoke late last year.

"Do you know what? I don’t think it’s the moment for a wedding right now but I’m ready to go as soon as I can hire a band. I’m ready to rock.

"If I can do it in 2021 I’m on board, I’ll have to see what way the year pans out. I’ve tried not to make to many plans, if I’ve learned one thing from this year it’s to not make too many plans." 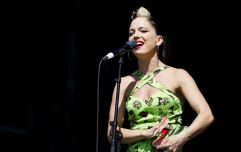 END_OF_DOCUMENT_TOKEN_TO_BE_REPLACED

The 50 Ways To Kill Your Mammy star also recently opened up about the pain he felt when his own father left him aged eight.

Baz told Tommy Tiernan that he used to tell people his dad had died so he didn't have to discuss the truth.

"There were a couple of different versions of how he died. It was easier to say he died than to say your dad left,” he said.

"I remember when I met him years later, I was maybe 15 or 16. I had moved to Egypt to spend some time with him to get answers and he just went, 'I don't want to talk about that right now' and that was it.

"There was no closure with it and then a couple of years later he passed away."

Girls With Goals || Her · Ep.160: The Beauty Of Coaching - Hayley Harrison joins us from Sport Ireland
popular
Body found in search for missing woman in Waterford mountains
Queen signs note 'Lilibet' in final goodbye to Prince Philip
Roz Purcell introduces 4 - 30 sizing for new Hike Life collection
WATCH: The trailer for the new Sophie Toscan du Plantier documentary is here
Jockey Lorna Brooke dies aged 37 after racecourse fall
Abducted French girl, 8, found in Switzerland five days after disappearance
Man charged with murder of 24-year-old mother Jennifer Poole
You may also like
4 days ago
Yvonne Connolly: "All that was going through my mind was that I could have died"
4 days ago
Wifey Material: Rihanna just dropped a bridal lingerie collection
5 days ago
Unearthed photo shows Prince Philip giving off real Prince Harry vibes at 36
5 days ago
Instagram v reality: Why are we so fascinated by "normal" photos of celebrities?
6 days ago
Jennifer Aniston reportedly adopting a baby girl
1 week ago
Ashley Cain hopeful blood transfusion will give daughter more time
Next Page