Bella Hadid has finally commented on those Weeknd hook up rumours

We would love for these two to get back together.

But it seems it ain't so.

Yep, over the weekend there were numerous rumours that Bella Hadid and her former boyfriend The Weeknd were seen hooking up at Coachella, but Bella has quickly put those rumours to bed.

E! News posted a picture of the couple with the caption, “The Weeknd and Bella Hadid were spotted ‘kissing all night’ at a #Coachella after party”.

The Weeknd and Bella Hadid were spotted “kissing all night" at a #Coachella after party and it’s safe to say we didn’t feel it coming. Link in bio for more on their desert reunion. (?: Kevin Mazur/WireImage)

Bella saw it and commented under it, saying: “It wasn’t me.” 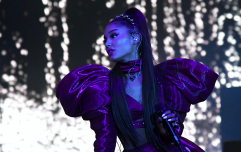 END_OF_DOCUMENT_TOKEN_TO_BE_REPLACED

The pair dated for two years before breaking up in 2016. The Weeknd then went onto date Selena Gomez but they broke up a year later.

Selena then went on to date Justin Bieber, but they are apparently now broken up too.

According to numerous sites, the day after Bella was/wasn't spotted with The Weekend, he was seen with his arm around Instagram model Chantel Jefferies.

Chantel dated Justin Bieber in 2014, and they had a brief relationship.

Is it just us or does this remind you off that group of friends you had way back in school and everybody just dated each other for a while. No? OK.

popular
James Arthur says his relationship with this celeb made him a sex addict
Wagatha Christie: Rebekah Vardy storms out of court just 30 minutes into final day
Fashion house Dolce & Gabbana is 'sponsoring' Kourtney and Travis' Italian wedding
'She was always in awe of celebrity' – Rebekah Vardy's ex-husband speaks out
9 movies on Netflix that make for perfect Sunday night viewing
Claire Byrne Live viewers in shock as woman shares family DNA secret
Rebel Wilson claims male co-star sexually harrassed her
You may also like
1 month ago
Why influencers are furious over Fyre festival-like Coachella party
2 years ago
Coachella 'to move to October' amid coronavirus fears
3 years ago
This Instagram star lied about an entire trip to Coachella to show 'so much of it is fake'
3 years ago
Woman investigated for animal cruelty after dumping bag of puppies in Coachella
3 years ago
Coachella: Seven Irish bloggers and seven outfits that we adored this weekend
3 years ago
Festival-goers told to run as fire breaks out at Coachella overnight
Next Page