Bella Hadid and The Weeknd have officially broken up... again

It comes a year after they reconciled.

Bella Hadid and The Weeknd have parted ways. In a statement given to E! News, an insider said that they haven't spent quality time together in months and are both at different stages of their lives.

The source said "Bella and Abel have split," with their jobs and the distance away from each other playing a big part in their decision. 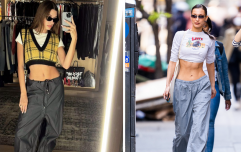 END_OF_DOCUMENT_TOKEN_TO_BE_REPLACED

"They are in different places right now, physically and mentally. Bella is prepping for her fashion week commitments and Abel is working on his music and his upcoming acting debut."

They added that they are always on different sides of the world at "opposite times" and "haven't spent quality time together in months."

"They hope to get back together at one point but for now are focusing on themselves and their projects."

Bella and Abel split back in 2016 after a year of dating. A few months later, the singer went public with his relationship with Selena Gomez, however, the pair broke up late 2017.

Bella and The Weeknd got back together at the beginning of summer 2018.

popular
Love Island's Faye Winter says she feels like she's "failing" as an influencer
Here are the baby name trends set to dominate 2023
5 delicious brunch spots around Ireland to try out on your next trip with the girls
The best Halloween costumes no matter what your hair colour is
A breakdown of what exactly is going on with Ned from The Try Guys
Why Are Men so Obsessed With Boobs? The Answer is Pretty Surprising...
Selena Gomez calls out "vile and disgusting comments" following Hailey Bieber interview
You may also like
5 months ago
Are thin eyebrows really on the way back around?
6 months ago
Bella Hadid shares Irish TD's People Before Profit Instagram post
7 months ago
Bella Hadid's jaw highlight is taking over TikTok
1 year ago
Dua Lipa criticises ad claiming her views on Israeli-Palestinian conflict are antisemitic
2 years ago
Science has proven that Bella Hadid is the most beautiful woman in the world
2 years ago
This is the unreal €50 palette that Bella Hadid swears by (and we adore it)
Next Page