They announced their separation last year.

And he announced he was getting divorced on Bumble...

However, it seems like Ben Foden is regretting his previous behaviour as he admitted that his life is a mess right now. 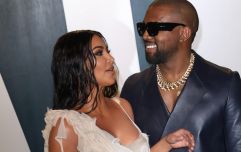 END_OF_DOCUMENT_TOKEN_TO_BE_REPLACED

The rugby player took part Celebrity SAS: Who Dares Wins, and while it's rumoured that he's in a relationship right now with another Irish woman, he said he still loves his ex-wife.

In a candid interview on the Channel 4 show, he said: "My life's a bit of a mess. I'll always love Una. She's my first love and the mother of my kids. I never meant to hurt her in the way I did.

"I think it's quite appropriate to do a course like this to put some perspective on everything."

Last month, Ben said that his cheating wasn't the only thing that broke his relationship.

"At the moment anything that’s published about me is never very good and pretty rightly so, because I was the one who committed adultery," he told The Guardian.

"It’s not ideal but we’re very amicable, we’re getting through it.

"We’re not the first people in the world to get divorced. We’ve got two little kids we adore.”